I was rather nervous about my birthday. Twenty years from now, 30 won’t seem so daunting. But right now, it’s such a significant milestone that I was thrown into a bit of a funk. I was turning 30 in a foreign country with people whom I have only known for four months. To add fuel to the fire, this is the first birthday I didn’t get a call from my grandparents, the first birthday cards did not arrive on time, the first birthday where I woke up alone.

My family has always done birthdays well. My friends back home were no exception. We go on cruises, rent out restaurants, celebrate in Vegas, ride bulls, and play laser tag for birthdays. Birthdays are excuses to go wild and crazy celebrating the life of a person whom you love and cherish. That morning my mom called and read me my “what I love about you.” This time it was in Spanish. I have the cutest mother of all time. Of course as she was reading all of my “I love yous” from years past, I was bawling my eyes out. I had changed so much in 30 years, which is obviously a good thing but also a trigger of nostalgia and regret. Plus I was still getting over the fact that my papa’s booming tenor wouldn’t sing me happy birthday and my gram wouldn’t ask me about my yellow cake with chocolate frosting. (They don’t even have that here!) Once again, I was in a major funk. 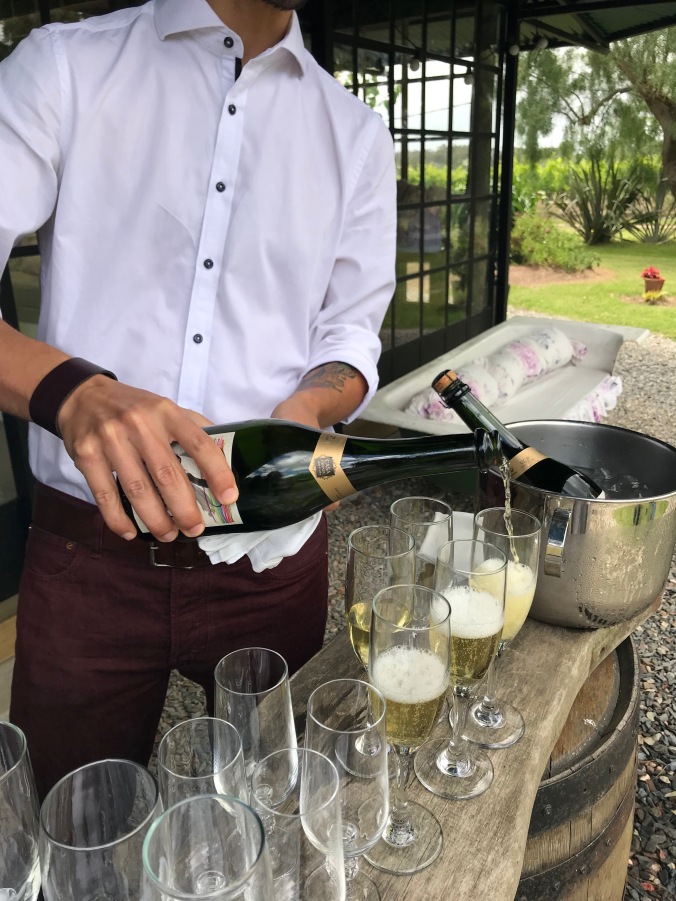 My beautifully sweet friend, Katie offered to throw me a birthday party. We were already signed up to go to a vineyard that day, but she offered up her house and made a reservation at one of our favorite MVD spots. She even had a friend in town, which made the effort even more appreciated. We started off the morning with some champagne on the bus ride. Actually, the morning really started off with a slice of super yummy banana cheesecake that my beautiful friend Nancy made me especially for my birthday. A bunch of us drank lots of wine and had some fabulous food at the vineyard. 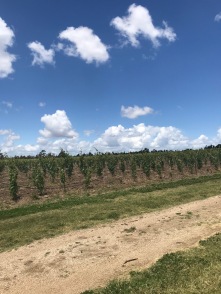 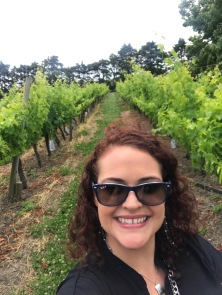 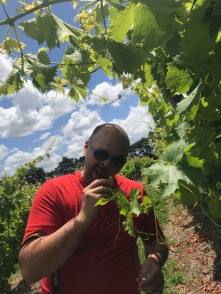 Katie and Tavis bought me awesome candles to blow out during desert. They were literally the sweetest people in the world trying to make the day as special as possible. The restaurant sang in both Spanish and English. I was surrounding by the beautiful hills, the smell of budding vines, and the warmth of friends. But I was missing home like crazy. I just could not shake the 30 blues. To top it all off, I had been feeling like my luck had run out. We were all given numbers for a raffle to win a bottle of wine. My number was 24. Guess which numbers got called…22, 23, 25. Well if that isn’t a sign I needed to get back in bed (shout out to Mary Chapin Carpenter ), I don’t know what is!

Later than evening, after we had transitioned to Montevideo Beer Company, my aunt Crystal called me. In the middle of the street I broke down into tears. Now my friends all know that I simply do not cry in public. I refuse to be vulnerable in front of people. While my friends were all inside ordering, I was on the sidewalk barely making it through a conversation with my aunt. I had not spoken to her for several months and just hearing her voice sent me over the edge. We had a table of 15 people who were all waiting to help me celebrate. One poor friend had been on his death bed the previous days. Another friend had literally celebrated with me the previous night at the teacher prom and then all day. Several friends made the trek in from Carrasco, which is a big deal in Montevideo terms. And off course, my leading ladies were being super troopers with guests in town. I was beyond appreciative of them and the celebration, but what I wanted more than anything in the world was to be wearing my pjs while my mommy scratched my head and we sang along to Hello Dolly. I just could not be doing 30 year old things. It wasn’t my time! I was simply not ready to be 30 yet.

Since then I have wrapped my head around my age. I cringe less and less when I have to tell someone how old I am. It still jars me a bit to say it out loud. And no amount of “but you are still so young” can shake it. And I am beyond grateful I have the friends that I do here because I know I would have fallen apart even more without them. I am a whole decade of different – different experiences, different approaches to life, different methods of coping, different celebrations, and different people. Add to that the different places that I will now be celebrating my thirties. When I hit 35, who knows where in the world I will be. But I do know that I will still need my “what I love about you” phone call, I will still need to hear my aunts voice, and I will still need friends who will go out of their way to make the day special.