I love a good beach town, and Cartagena did not disappoint. Although criticized for being too touristy, Cartagena is worthy of a trip when traveling through Colombia. But fair warning: you will fall in love with the place.

Every major Colombian city has free walking tours. They highlight the main attractions while providing basic historical and cultural information. I highly recommend participating in as many as you can. Cartagena’s walking tour centers around the historical wall built by the Spanish as protection against pirating of the immense wealth stored in Cartagena. The city was once a major hub for restocking supplies for the long journey back to Spain. Therefore, priceless jewels, gold, and other resources were held in Cartagena while ships restocked. After a infamous attack by Sir Francis Drake, the Spanish decided 200 years of construction of a fortress was worth the time and money.  Therefore, Cartagena is made up of the walled city and everywhere outside of it.

On the walking tour, our guide, Jorge was a wealth of information about the tumultuous history surrounding Cartagena. From war, to the Spanish inquisition, to slave trade Cartagena has had it’s fair share of bloodshed. Yet, the Colonia town remains deeply routed in traditions and the merging of African and European cultures. Drums can be heard in the streets and the colors of the Colonial buildings make the city festive and welcoming. Little nuances about the city really fascinated me. For example, there is a statue of Bolivar, the man who is touted for gaining independence from Spain for almost all of the Northern countries in South America, in a park and within the statue is the entire history of Cartagena should a natural disaster occur. The people are proud of who they are and where they came from. Cartagena is the first place I have seen in Colombia that displays both the country and city flag. They clearly love where they live and I don’t blame them. 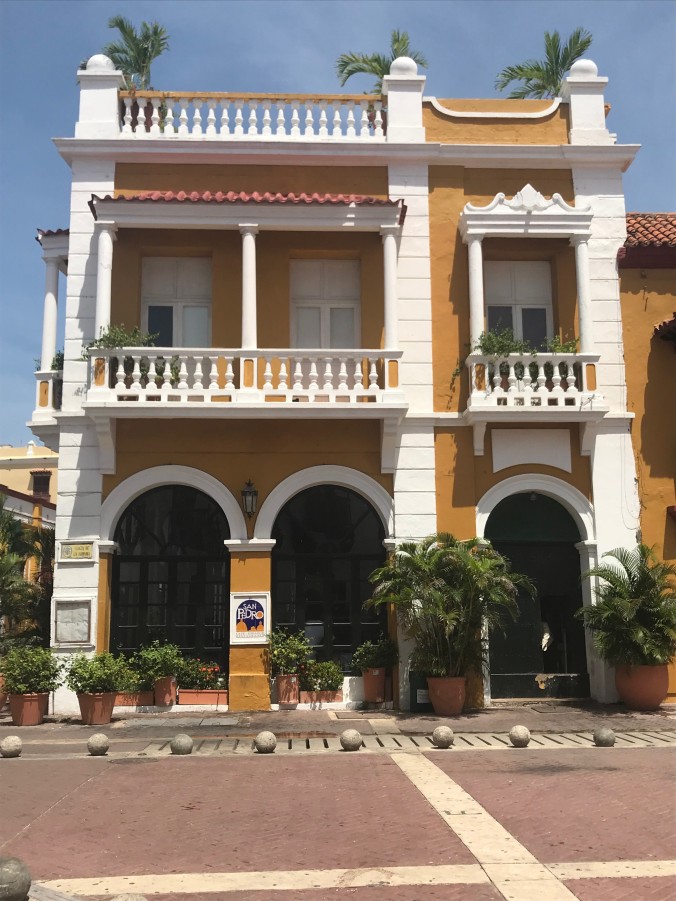 For the walking tour, I used Free Tour Cartagena. I literally signed up two hours before the tour started. Again, if you are solo, you can basically show up and get on a tour, but it always helps to sign up just in case there is an overwhelming group of people for the guides. 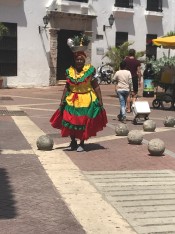 Although there is a free tour for street foods as well in both Cartagena and Bogota, I recommend using the Cartagena Connections.  The cost is 70.000 pesos or roughly $25 and it is well worth it. Jon, the guide, is from Germany and he knows and love Cartagena street food. Not only do you get to taste all of the lovely little morsels, but you also get all of the history and ingredients of each food. Jon makes the tour accessible for veggie and meat eaters and most of the food is gluten-free anyways because it’s made from corn. From Papa cones to Arepas, I was in serious food heaven. Make sure you go hungry because even with the walking, there is a lot of food. Oh, and bring extra water!

Jon also knows all of the history of the streets and local ghosts and gives a really entertaining narrative about the different areas of town. As a foreigner, I think he is a little more realistic about the situations in Cartagena and Colombia. Most of the people who do the daily tasks in Cartagena cannot afford to live in the city limits. So they travel in everyday for about 2 hours, work a full day, and travel 2 hours back home. Therefore, Jon imparted the importance of street food for the average worker. The best part about this tour, besides the food, is you get to go into the local places that are not usually tourist attractions. It’s the real side of the city.

Cafe del Mar and the Sunset

As an adopted Uruguayan, I cannot pass up a chance to see the sunset. Located directly on the wall, Cafe del Mar is a fabulous location to watch the sun go down over the Ocean. Drinks are REALLY pricey, but it is a nice little splurge for a beautiful view. I lucked out and got a table directly at the wall. Because I was alone, I ended up asking some travelers if they wanted to join me. One was from Mexico, one from Spain, and one from France but they are all Au Pairs in New York City. We talked all about the states and what it was like being an au pair as the sun slowly set behind us. It was a pretty fabulous way to say goodnight to the setting sun. 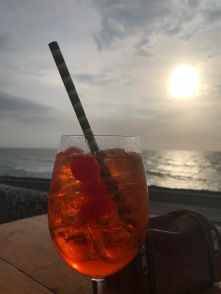 Two things I love – parties and buses! I signed up for the famous Chivas through my hostel. And I made three mistakes before the night began: first, I completely forgot how to tell time and was an hour early to the pick up spot. Of course, I panicked a little thinking the bus had left…whoops! Second, I didn’t ask the hostel to give me all of the details about this little adventure, including which bus to look for because there are thousands of them when we start. Third, I misread what the party buses entail. I thought we were going bar hopping. But apparently, the chivas are basic open-air rides around the city with a lot of rum and the end is a club. 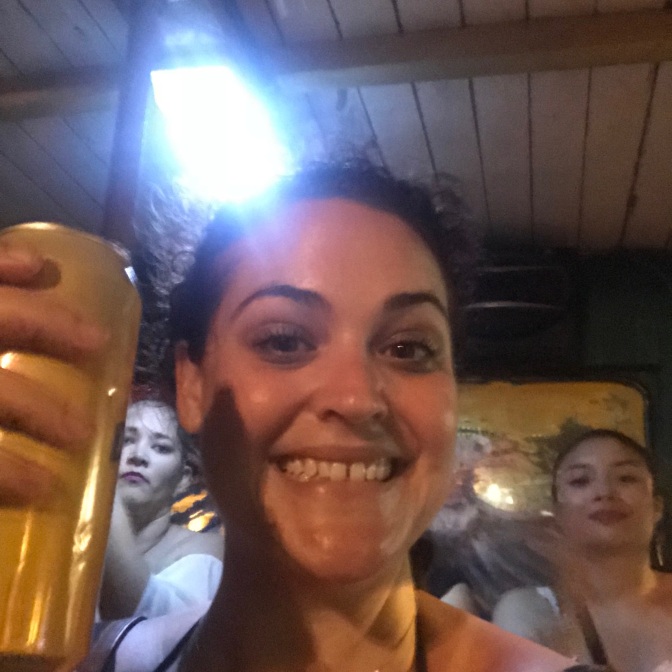 When they finally started to hand out booze! 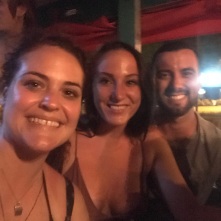 Birthday girl! These were my seat-mates

Super Sweet Mexican ladies were my other seat-mates 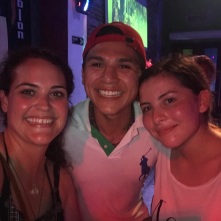 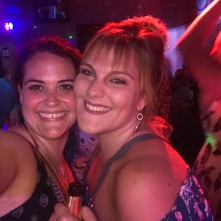 This girl is SO MUCH FUN! She may be my female soulmate!

After a flustered twenty minutes of going from bus to bus asking “are you my bus?” I said screw it and hopped on the one that looked the most appealing. Fun Fact: Chivas are all the same. They do the exact same route, so even if you buy a ticket for a specific one, you can hop on any of them. After that crazy and confusing ordeal, I was in desperate need of a drink. My bus mates were all from Philly and New York and they were clearly the partiers. Right Bus!

We started moving and…no alcohol. Then we started picking up more guests. Still no booze. Then some children and elderly people got on. My eyeballs got really big. “Guys, I think we got on the wrong bus!” I said to the other Americans. Were we on public transit? Finally, the very last seat was occupied and the bus turned it up! Music started playing, plastic cups were past, then ice, then bottles of coke, and finally rum. Ok, this was more like it. Until the bus dropped us at some random street corner and had us do a conga line. WTF! The Americans all realized this wasn’t a pub crawl and decided we needed way more rum. So the bus guy gave us our own bottles! One of the Philly girls was celebrating her birthday so the bus driver put on Party in the USA. Oh. My. God! We were THOSE Americans. And the rest of the bus was completely silent. haha.

Finally, we made it to the club, which was pretty hopping for a Monday night. Spanish music that I now know was playing and I was a dancing queen! I invited the Swed and he came! And this awesome Colombian family adopted me into their dance circle. I was in all sorts of happy. Oh, and what happened to those kids who were on our bus? The parents left them in strollers asleep with the bus driver! Clearly, we were NOT in the USA. The night ended with a pool party back at the Americans’ AirBNB. It was pretty epic! I waddled back to my place (two blocks away) at three in the morning. Word, Cartagena. That was a top night!