Once again, the Rio transportation got the best of me. I was supposed to be heading to climb a mountain in Gavea and instead ended up on the right bus but in the opposite direction. Whoops. I figured that like the Uruguayan system, what goes one way must come back. It would be a great way to see a different part of the city. So I hunkered down for the long ride. Bus 112 started out in the bustling and maintained Copacabana; then we took a sharp left and into the tunnels. That is when Rio became real.

The first thing I noticed was the graffiti. Now I have a love/hate relationship with graffiti. My love is for the true artistry of the craft. When made into massive murals and profound political statements, Graffiti can be beautiful and haunting.

Rio has plenty of this graffiti. Almost every walled surface along the city is covered in some sort of creative and colorful piece of art. I wonder if like Athens, the government made it legal and encouraged it to promote art over rebellion, creation over displeasure. Some of the pieces that flew by my bus window stole my breath.

Whoever T. Leal is, you are one talented man or woman! This signature was on numerous gigantic murals all over the area. Really profound words of creative genius. Some so much that I don’t understand them but appreciate them nonetheless.

However, I hate the ugliness of tags. They make sense to me, but they also make me angry. Why desecrate a beautiful architectural gem with your bullshit? 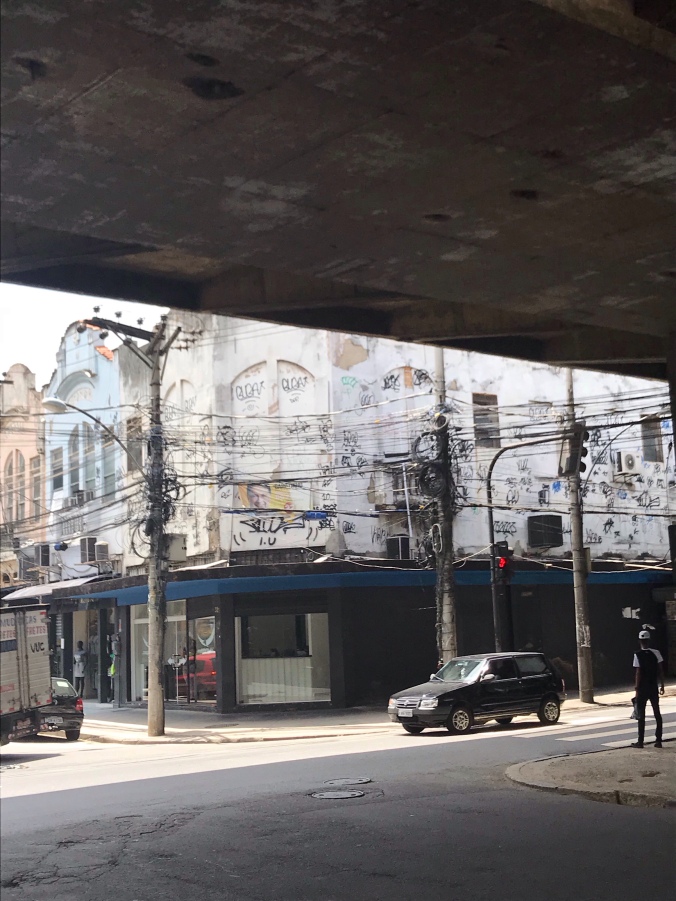 And why does the government not do anything about this? I saw massive government buildings, abandoned buildings, and beautiful houses with tags all over them. My first thought was some of those suckers are really high up and take made skills. My second thought was I hope someone ruined something beautiful to that person. There was this beautiful grey-stoned house, a personal resident, and the entire front fence had a tag on every stone. I was caught up in the majesty of the house and then disgusted as my eyes trickled down. Again, why does the owner not do something about this? If I’m going to be hones, I don’t really like the look of graffiti letters. They look so raw and crude to me. So, my love/hate relationship with graffiti continues. Rio is a city where at one point I am staring in awe at the talent and the very next second my brow is furrowed in disgust.

The next site on my accidental bus tour was one of the Olympic areas. This was the saddest part of all. This great long arena with stone bleachers right out of Greek times were completely abandoned and desecrated. Even the gigantic Green Olympic sign, probably hung to explain what the arena was used for was tattered into shreds. It looked like the painting of the Prince in Beauty and the Beast after the Beast rips it in disgust. Underneath one of the bleachers were some of the items used in either the opening or closing ceremonies; I’d have to rewatch footage to recognize which. Great elaborate and colorful float decorations sat abandoned and exposed to the elements. Forgotten, but not out of sight. These were the Christmas toys two years later – shoved underneath the bed with disinterest. I don’t know why that effected me so immensely, but seeing those abandoned decorations meant to symbolize the pride and culture of the Brazilian people really made me emotional. I mean you don’t have to keep every little thing, but at the very least recycle or offer it to the athletes or decorate schools or let someone sell it on eBay and make some money. I don’t know. It really just bothered me.

Finally, remember those Favelas? Remember how I wanted to see them up close and personal. Totally got that opportunity. Not that the bus took us up into the narrow streets of the living quarters, but we definitely got a tour of the street shops and beginnings of the communities. It really is incredible.

The more we traveled into the areas, the more people were out selling street food, cheap souvenirs, and labor services like car window washing. At a red light, I watched three teenage boys – tall, bony, and black as night squirt soapy water onto car after car after car whether the driver wanted it or not. They had the cleaning and squeegeeing down to a science. And drivers handed out cents. At one point a young man looked at the bus. We made that awkward eye-constant so I smiled and he smiled and then the bus pulled away. I could help but wonder what his story was – Did he go to school? What subject did he like? Was there a teacher who gave him dreams of possibility? Did he have siblings? As connected as we all are, we are also deeply far away from each other.

Just as I was reaching out of the bus window to take pictures of a beautiful view of Christ the Redeemer, the bus pulled into this rundown industrial wasteland and stopped. 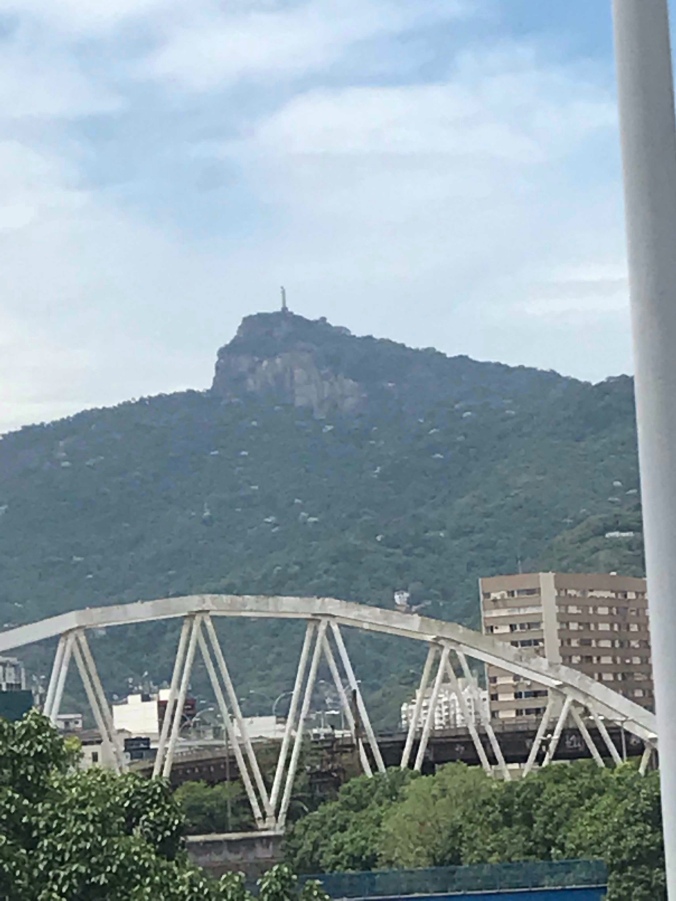 I noticed everyone else on the bus got off and the bus turned off. Shit. Shit. Shit. Now I don’t know a damn thing in Portuguese. So far I just pretend like they know Spanish and use my limited vocabulary in hopes something sounds similar enough. That and miming. So I handed my phone to the bus driver with the Park name of where I wanted to go. Quando vamos aqui? And that’s when the bus driver laughed and shook his finger. Buses don’t circle like in Montevideo. Nor can you use the same ticket in a hour like back home. You pay once and that’s it if you don’t have the resident bus card. So you have to be really strategic about which bus will get you the closest to your destination so as not having to change. Well, I needed the next bus that was going back in the direction from which I came. FML. He told me that the next bus was two in front of ours, but when I went to look the bus was empty and had no number on it. So I started walking from bus to bus. And let me tell you, when you get enough scornful looks with “what the fuck you doing here white girl” you head straight back to the bus from which you came very quickly. I clung to my previous driver like a shadow until the new bus gained a driver, turned on, and accepted passengers. 3.40 Reals again and I was back on track to climb a mountain. In hindsight, it was an adventure I was super glad I took, but I could have done without having to pay double to get to a destination only fifteen minutes from my hostel.

ADDENDUM: My first day in Rio, the woman who tried to help me in the Metro told me she had never seen Christ the Redeemer up close. It was too expensive. Riding the bus today really made me think about this. He looms over every neighborhood. You can see him from every angle and the Favelas are no exception. And yet, it’s too expensive for lower class people to go see something that is pinnacle in defining their city. Not to mention it’s a big statue of Jesus Christ. I have a real problem with this.