Today was one of my favorite “getting-to-know-a-city” days I have had in South America. I packed so much of Bogota into one awesome day and it is all because of Mike and his Bogota Bike Tours. Located roughly four blocks down from my hotel in La Candelaria (The Old City), this tour was perfect for someone like me who is just in Bogota for a hot second. However, it was so cool that even if you have the opportunity to really explore the capital, I still recommend it. Bring cash and some sunscreen because the high altitude will burn the hell out of you.

Mike is originally from California. He was a journalist and when the print industry started tanking with the arrival of the internet. He said “screw it” and hopped on a plane to South America. He eventually landed in Colombia, loved it and decided to open up a bike tour. Colombia is known for road biking and Bogota is quite easy to navigate, even with fifteen tourists traveling behind you. Thirteen miles and five and a half hours later I am the happiest little biker ever! Mike really makes the Bogota experience authentic and fun. Plus, you get a bit of a work out! The tour is only 14.50USD but I would have paid tons more for the experience. Cannot recommend this introduction to Bogota enough.

Mike telling us about the Yuca

We started off in the Old City. We learned about the emerald district, the government buildings, and the cathedrals around the center. Mike is full of crazy stories! From an emerald dealer losing his precious stone $10,000 stone down a sewer and getting a homeless man to dig it out to the storming of the justice building by the guerrillas, who took the justices hostage only to have the military say screw that and start pelting the building with tanks. Hence, why the building is newer than the others in Plaza de Bolivar. I really appreciated his realistic view of Colombia. He didn’t sugarcoat anything for us. Yes, there are bombing. Yes, there are dangerous areas in the country. Yes, crazy shit happens everyday and politicians are not exactly helping. However, he is also optimistic about things that have happened in Colombia in his twelve years here and things still to come. It was neat to see this part of the city from a different perspective. Plus, we got to try some big ass ants. 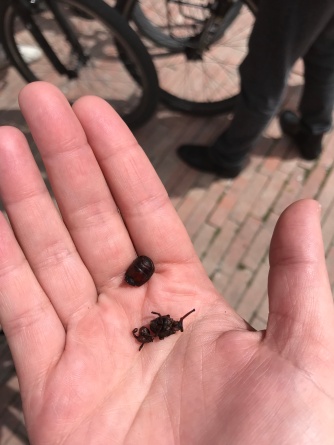 Next we headed to the bullfighting ring. Bullfighting is legal again in Bogota. The new mayor really likes the traditional routes. Our guide in training, Angel does not! She told us about the time she was out protesting the bullfighting only to have a bomb go off by the police cars by the guerrillas. One of the biggest pieces of tension in politics right now is economics. There is a ever increasing canyon between the wealthy and poor and therefore between the ultra-left and ultra-right. Ultra-right just won their election. Although peace treaties have been signed, Mike isn’t hearing about much progress for peace happening. However, this is mainly in the countryside where narcotics and illegal mining are king.  But back to bullfighting. Although I am not a proponent of animal deaths as entertainment, I take on the same mentality as Mike – the bulls have incredible lives until the end AND are eaten. I want to see these mega farm factories shut down first before tackling bullfighting. Regardless, the venue is amazing and reminds me of the Arabic influence architecture of the one in Madrid. I personally think they should use it for concerts and beer festivals and fairs. They would make a killing! But no one made me mayor so… 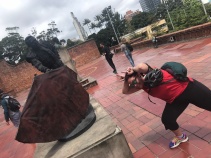 You mess with the horns, you get the bull.

In case we all forgot this is a manly man fighting a bull, his exaggerated junk is not bronzed.

Would this not make the coolest beer festival venue?!

We made our way towards the financial district. This is where the cycling got a bit tedious. There were so many people on the sidewalk. I’m shocked I didn’t run over someone. We saw the national museum, which used to be the old jail. It really is actually a unique building. We also got to see the tallest building in South America, but unfortunately it ran out of money so it remains vacant and unfinished. My architect brother would be applauded. Next came Little England. It really felt like we were in London. Now the town-homes are a swanky university and they connect to a beautiful national park, the second largest in Bogota. This is where I almost ate pavement. My bike wheel got caught in a street barrier and I went head over handlebars. Thankfully, it’s a mountain bike so it teetered long enough for me to slowly fall forward and catch myself before I landed on the ground. I did get some concern from the Dutch and Swiss, but I was fine and so was the bike. 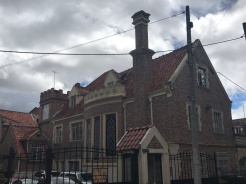 In the park, we stopped at this little street market that sells fresh fruit juices, fruit salads, and empanadas. I got the Guanabano juice, which tastes like cool melted ice-cream with honey. Yummy! There was a Brazilian in our group and we reminisced about the amazing fruit juices of Brazil. But I must say, Colombians know their fruits and their juices pretty darn well. 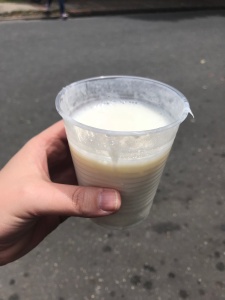 Did you know that Colombia has a trash museum? This wealthy kid inherited his parent’s home after traveling the world and was so appalled by the trash around the world that he filled his entire home with trash as a statement. Go see it! You can even google maps it.

We got a tour of the street art along with stories to accompany them. Then came the coffee factory where we tried the beans and had ourselves a cafecito. We went through the red-light district. I mean like REALLY went through it. There are no pictures because Mike said, no-no. But protestation is legal in Colombia ONLY in “Tolerance” areas. These are designated areas where women can advertise themselves on the street. And advertise they did. They stand in these garage containers with various levels of clothing. And let me tell you, there is literally any type of girl to woman imaginable. And there is no shame surrounding this district. They are not shielded away or made to cover their profession. This isn’t Pretty Woman. This is a living and reality for many many many women. I asked where the man district was and got the “really?” look. Guess the macho Colombians are not ready for that. There is a transvestite district though. And I learned that Colombia has the easiest process for changing genders in any country in the world. They literally fill out a form, pay a fee, and POOF have a new gender on their documentation. Gay marriage and adoption is also legal. As is abortion in some cases. There is also a new movement to return to legalizing personal drug carrying, meaning you can carry enough for personal use only without ramifications. Right now, there is a huge crackdown on drugs. Police shake down every male that walks by them. I’ve seen several in the few days I have been here. Hands against the wall and serious checking of pockets. Mike said it happens to him all the time.

We cruised by the cemetery district and saw some really cool art along the way. They have a cemetery for every religion; however, the old children’s cemetery was excavated and turned into a park. According to the old mayor, “the living are more important than the dead.” You can quite literally dance and play on what used to be the graves of children. Ok, Bogota.

But what really made our trip and this whole tour really special was our final stop. We started in a closed market. We tasted every fruit imaginable and they have a fruit for everything – constipation, kidney health, cancer prevention, even a fruit specifically used as an aphrodisiac. It’s translated into the woman’s boob. The also have one that is called the breast-feeding fruit because you suck and suck on this white sweet film around a hard seed. Regardless of their literal and figurative fruit names, they were all delicious. I like that we got to try all of them without having to buy them ourselves. Mike and the venders just cut up one after another and passed them around. We tried coca leaves (tastes like Mate), coca seeds (tastes like stale coffee beans) and I even volunteered to crack a passionfruit on my head. It was really fun! 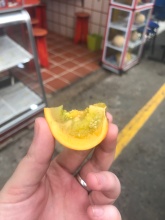 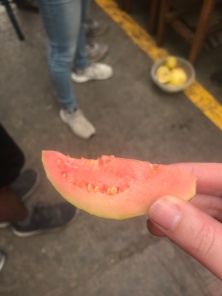 Has little white seeds that are hard as stones 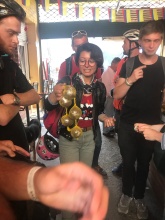 We headed down the street to a bar, picked up a beer, and progressed to the very back where we tried our hand at Tejo, the national game of Colombia. Okay, you have a clay-filled slanted board. Then you place triangles filled with gunpowder in a circle about a foot in diameter. Then you drink beer and throw these heavy stones towards the board. If you hit a triangle….KAPOW! The gun powder explodes…loudly! I had a little anxiety attack every time someone threw a stone.  I really want to know how drunk someone was to come up with this game. Okay, let’s take a triangle and filled the hell out of it with gunpowder. Then we can throw heavy shit and try to make them explode. We will give two points to anyone who gets the stone in the center of the circle of triangles just to make it more skills-based. Great idea, right?! I spazzed out at first because I was scared of the noise, but after a beer and hearing loss, I got much better. The girl from Switzerland and the guy from Brazil were really good! It was a fun and loud experience and one I’m glad I did.

Alas, we had to head back to the shop. All of us had really bonded on our tour so we exchanged information and made plans to meet up in cities along the way. Our group had four from the Netherlands, two from Germany, one from Switzerland, one from Brazil, two from Canada (though one is originally from Argentina), one from Manhattan, and me. I cannot wait to catch up with a few of them in Cartagena. But first, Medellin!!

SIDE NOTE: I found out why my Uber driver got pulled over the first day. Uber is illegal here. But numerous people drive anyway. If they get pulled over, they either hand over money or get fined for participating in Uber. The reason we got pulled over was because I was sitting in the back seat with my stuff. So, I sit in the front seat now.