I was talking with some friends right as school got out and stumbled upon the knowledge that my friend, Gabriel, would also be in Rio at the same time as me! This was wonderful news! Not only had he lived in Rio AND speaks the Portuguese language, but Gabriel is a true high-ho good time. You always take a long nap before heading out with Gabriel because you will see the sunrise. With Gabriel, the experience is always authentic because he is authentic. He has lived in numerous countries, speaks five languages, and knows how to enjoy life. I absolutely adore him! So when Gabriel said “honey, let’s get some dinner and go out,” I said of course.

The first night I met Gabriel at his hotel and we walked a block for some food. We were both starving and unlike Uruguayans, Brazilians eat at a normal time. Not much was open at 10:00 so we couldn’t be too picky. Despite the limited options, we ended up eating some pretty darn good Brazilian food – my new favorite Bacalhau (fried cod balls) and shrimp risotto. Fish is big in Rio and they do it well. We also enjoyed ice-cold beer (of course). I expressed to Gabriel that they cold beer was my favorite part about Brazil. “Oh, honey. No matter how hot it is. It can be the hottest day of the year. Brazilians will have cold beer and ice. Even in the poorest areas they always have ice.” Now that is a cultural element I can get behind.

Gabriel asked what I wanted to do that evening. Samba! So we headed to a neighborhood that all of the blogs raved about and Gabriel had never been…Lapa. Apparently, back when he used to live in Rio, Lapa was the place you sprinted out of after five if you knew what was good for you. Now, it’s this booming hip place filled with club after club after club of Samba music, dancing, and drinking. The Brazilians do going out well. Live music is really the only way to go and Samba is about as fun as it gets. It reminds me of Candombe but with numerous instruments and singing. The beat just makes your whole body shake. It is such a freeing experience. And the other thing I love…Brazilian men DANCE! They can’t help themselves. They grab any girl beside them and just dance! And they sing. It was clear the band was playing classic samba songs because the entire crowd belted out the words in unison. I was quite literally in my heaven. There was no despacito, no creepy men against the wall, no crowds that stole your air and made it impossible to move. Instead, buckets of beer on ice were plentiful, lights were on, windows were open and people were moving their bodies in all kinds of directions. Oh, and the clubs close at decent times. The music stopped around 2am and Gabriel made our way to an out-door club area that was still open. Gabriel is Uruguayan. It was NOT time to go home. We ordered street Caipirinhas and holy shit! One was enough to send us over the edge of no return, so of course we had two! We met some new friends and enjoyed the music on the sidewalk. Street children walked around selling cigarettes, gum, and (get this) halls lozenges! What? Why is that a party thing? Does everyone have sore throats from all the singing? So of course I asked a Brazilian. Apparently Halls are their breath fresheners. You pop a Halls right before you start kissing someone. Umm, nothing like the romance of some Halls. I feel like the company is missing a serious branding opportunity. #everykissbeginswithH 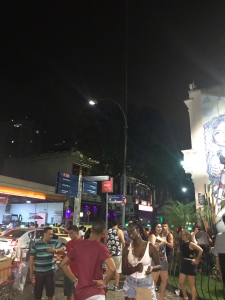 We rolled out of Lapa around 3:30 (Early for Uruguayans) and I woke up on the struggle bus! Blast you Caipirinhas! Thankfully Brazil deep-fries everything, so I got my salt and carb intake, hair of the dog, and Acai to make myself feel a little healthier and headed out. (More on my walk through Downtown next.)

That evening I met Gabriel again. He was meeting friends from Norway (one of the many places he has lived) who were also visiting Rio and asked me to tag along.

Of course, I said again. We headed to the bay and ate at this place where you order from an outdoor counter and then take your food and sit on the stone wall overlooking the bay. 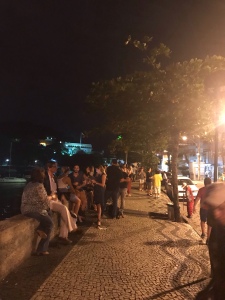 “Very Brazilian, Darling,” Gabriel told us. “The Brazilians are like Iguanas…they need heat and cannot be indoors for long.” I think Gabriel’s description is accurate. They like to sit for hours outside. In fact, I don’t think I found a single restaurant that was completely indoors. Even inside seating means all windows open. The fried fish was AMAZING! And we plowed through 8 beers. 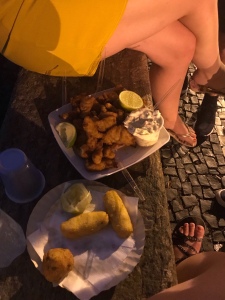 Then we convinced the Norwegians to come out for just a little longer. We wanted to show them Lapa.

So back we went. By this time we were old pros and new exactly which club we wanted. One thing I don’t like is you have to pay a cover for every club. I assume this is how they pay the bands, but it always irks me. However, this time the cover came with a free drink ticket! Winning! The dancing commenced. The Norwegians didn’t last very long, but Gabriel and I danced our asses off. Then I met Douglas and his friends.

They were the nicest, most inclusive bunch of people! They shared beers with us danced with is and tried so hard to speak broken English. Gabriel decided it was all a little too straight for him and went in search of a gay bar. I stayed with Douglas to flirt and dance some more. Bucket after bucket after bucket of beer and I was smitten! These were the happiest bunch of people. The Brazilians simply smile. All the time. They just smile. And since their English proficiency was about as broken as my Spanish, we all did a lot of smiling and miming. But we didn’t care. By the end we all held up hand hearts and realized we were the best of friends. And lets face it, Douglas and I were a little in love. But I mean, can you blame me?