The Mormon couple decided to join. What a strange thing to do. Apparently, they had checked the weather and saw rain for the whole week. No duh, it’s the rainy season. There is a 50% chance everyday. I bet it’s the easiest time of year for the meteorologist. Rain for the next three months. I’m going on vacation.

The Mormons are a young, newly married couple from Idaho. Her dad is a missionary in Chile so we are talking real mormons. The entire time at breakfast, they talked about their missions in the exotic places of California and Utah. I don’t mean to jest, but the entire time I had the Book of Mormon songs running through my head…but I pray I’m sent to my favorite place, orlandoooooo. I think at one point I actually laughed out loud when the girl tried to tell me that Utah was a very difficult placement.

But ok, Mormons in tow, we headed up the mountain at 5:30am to get one of the first guided tour spots of the citadel. The day was extremely foggy. You could barely see anything as Dayvit explained the different levels of Machu Picchu, the history of building the place, and the purpose. And it was cold. I had on a jacket and a fleece. 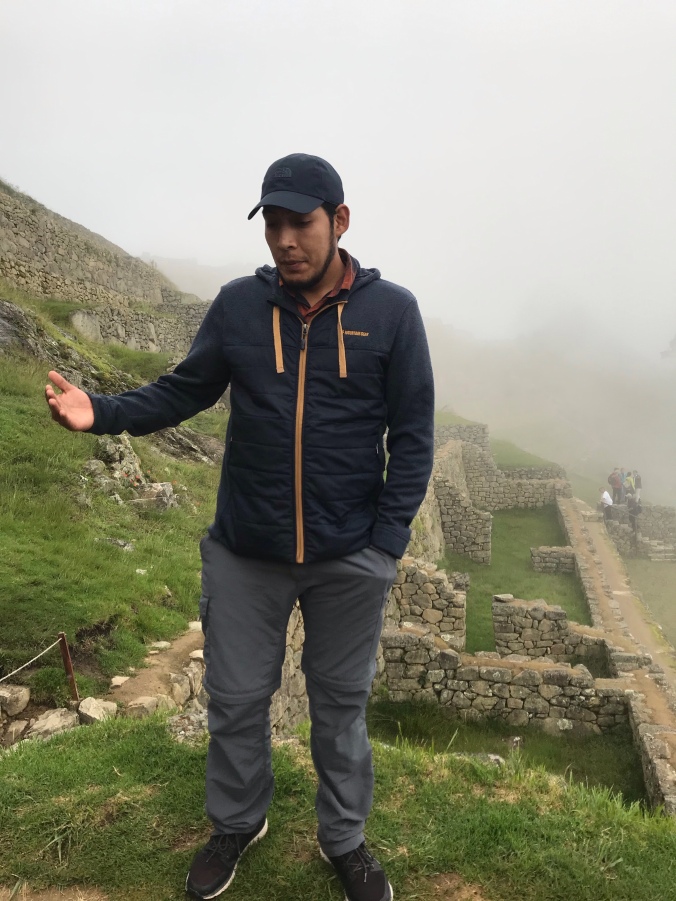 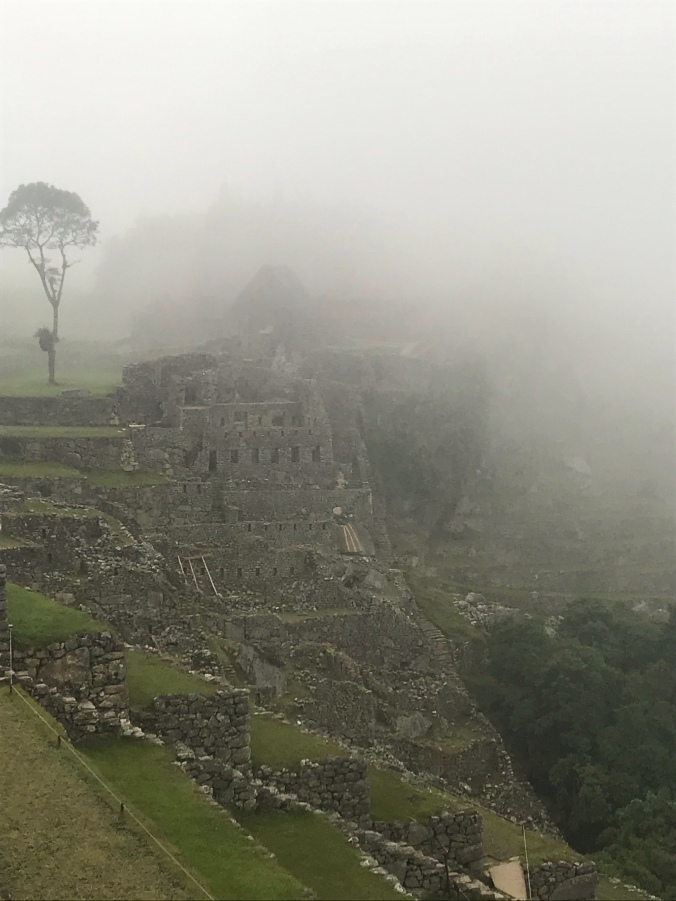 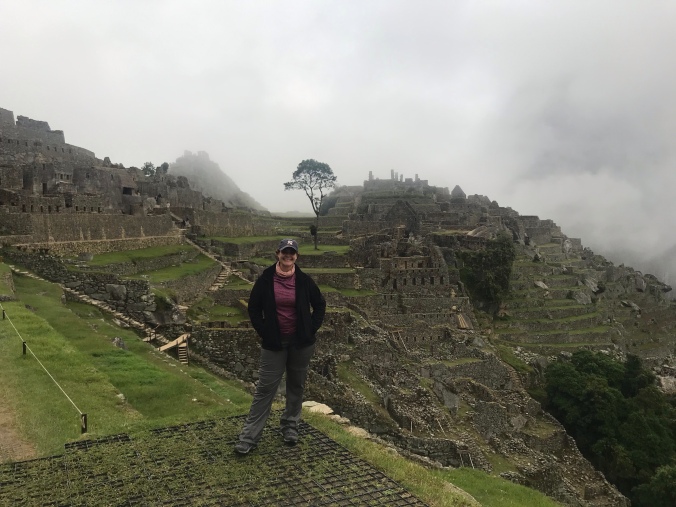 It was very cool seeing the different places – the sun temple, the king’s house, the school, he experimental farming area. I also was impressed with the Incan compass and Incan sun dial. These people were extremely intelligent for just three hundred years of existence. 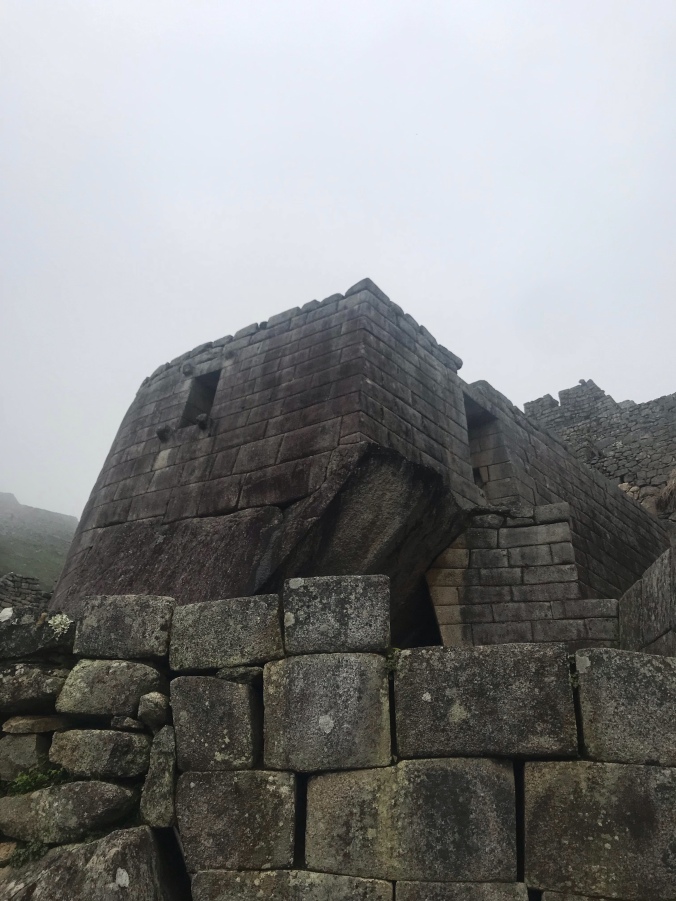 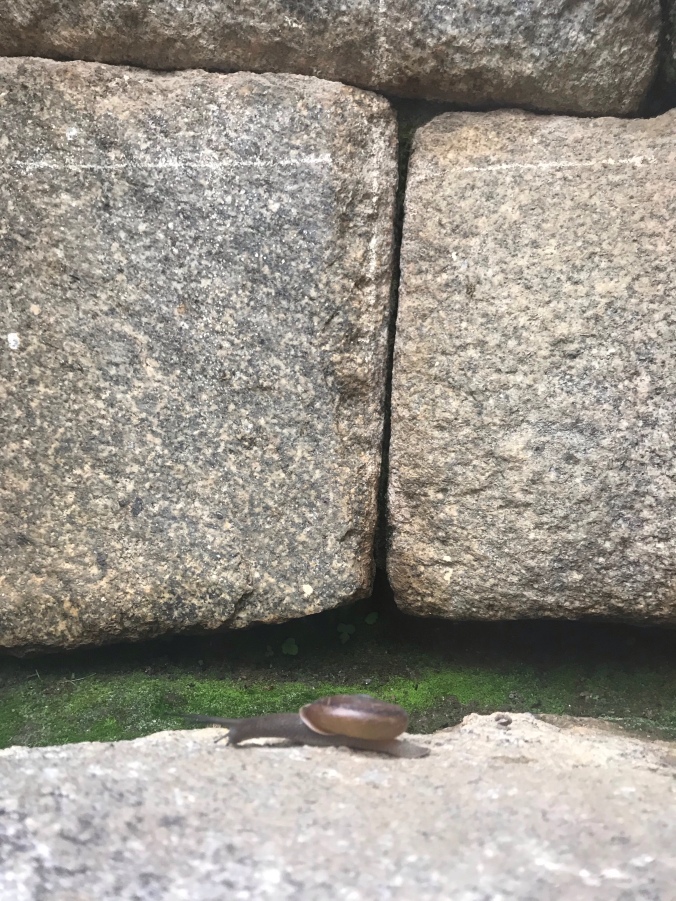 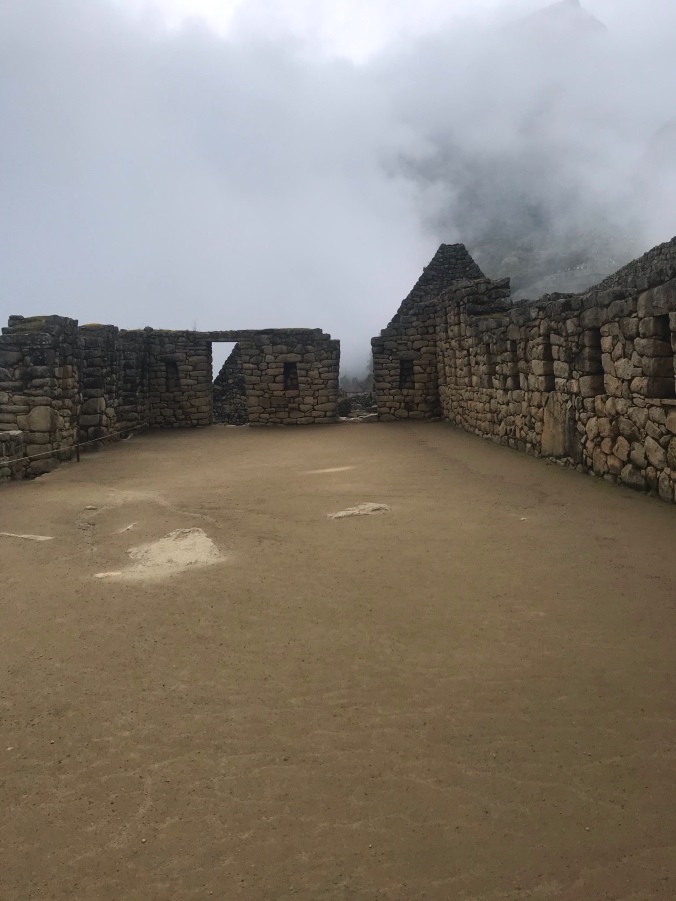 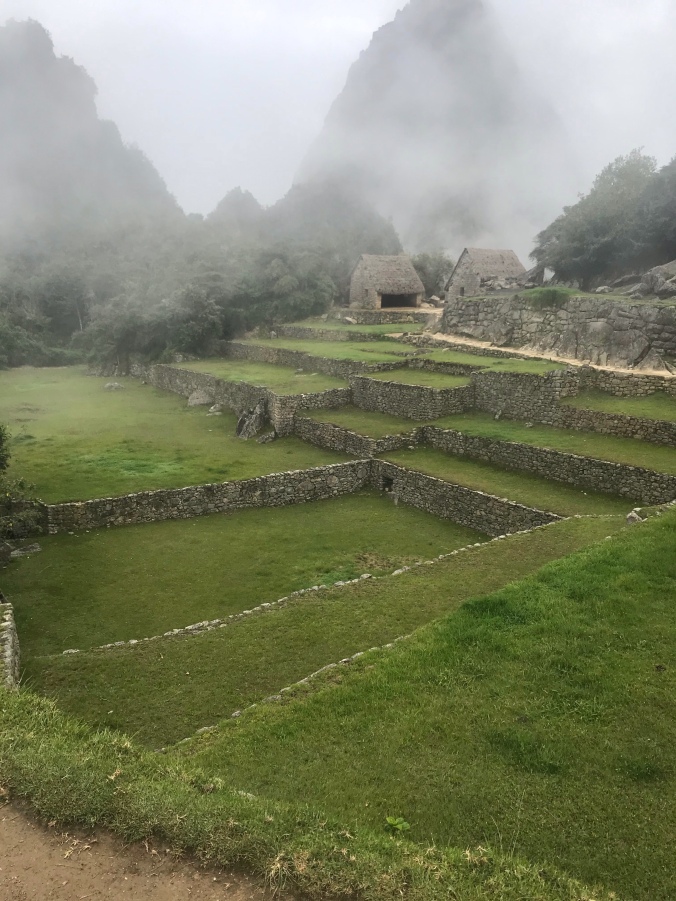 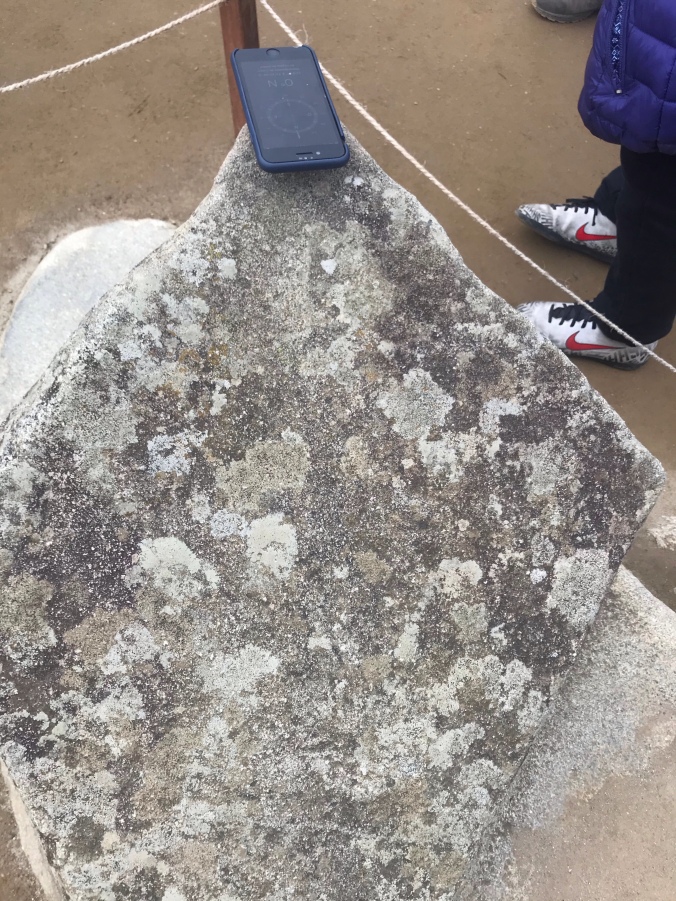 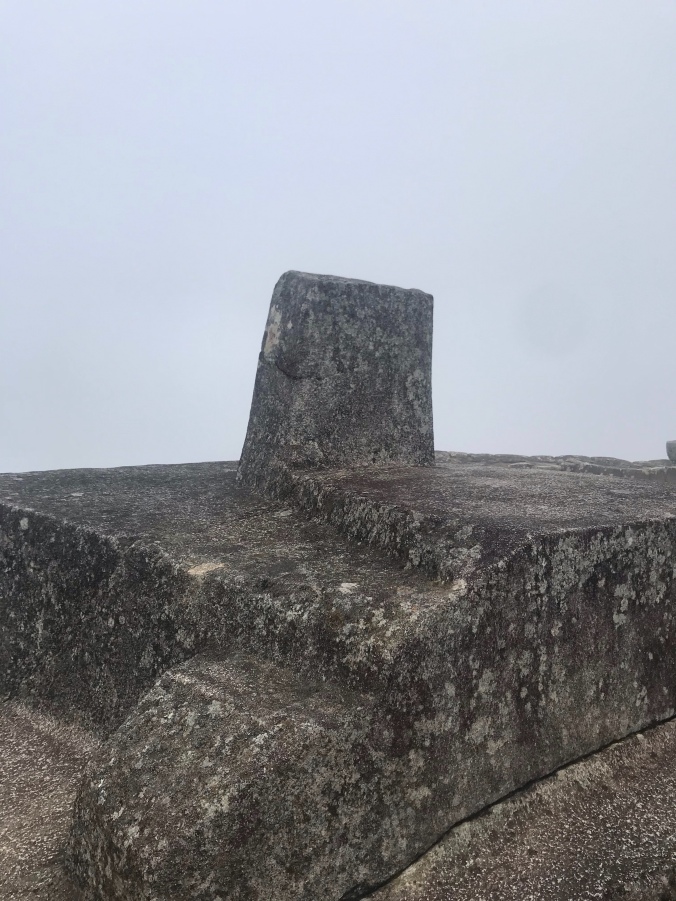 Machu Picchu was built to connect the highlands with the jungle. The jungle was were the coca grew. That is how important this plant was and still is. They created a masterpiece city just to be closer to the coca. Machu Picchu was also a place of religion and sacrifice. There are numerous temples scattered throughout the citadel. But it was not the most important city. Cusco was. So really, the king did not often make the trek to Machu Picchu.

I know this is silly, but I was most impressed by the canal system. They took the water from the glacier, which is pure, and created canal systems all over Machu Picchu that still function. That was the coolest thing to me. 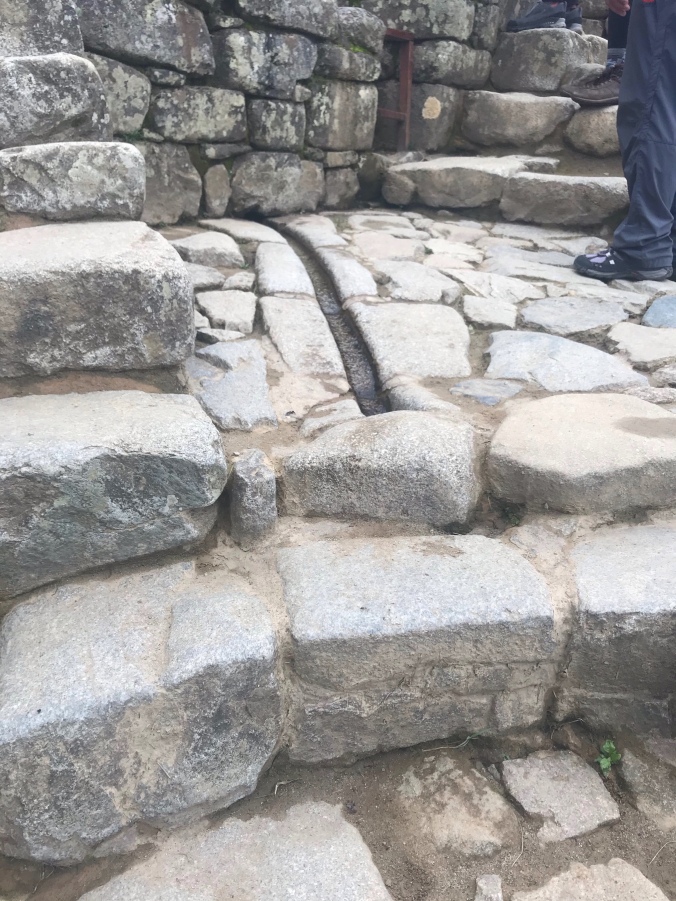 After our guided tour, we exited the citadel and reentered Machu Picchu to climb our mountains. The mormons were doing Huayna Picchu, which is supposed to be shorter but harder, and I was doing Machu Picchu mountain. Mine is the famous one that gets the perfect picture. Theirs is the mountain behind the citadel. 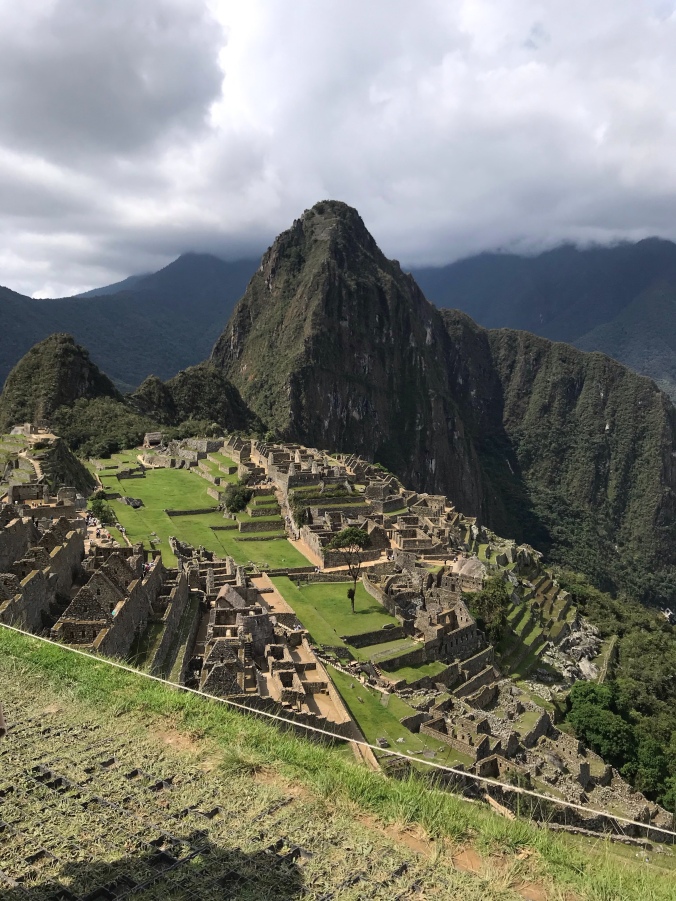 Dayvit had showed me the turn off to get to Machu Picchu mountain, but I must have either been tired or emotional because I completely missed it. You have regulated times to go up the mountain. Mine was 9-10 am. Miss your window, you don’t go up the mountain. I was also told that I would need two hours to get up and an hour and a half to get down. Plus I had to be back at Aguas Calientes by 1:30. So up and up and up I went. Where the heck is this place? After a fifteen minute climb back toward the sun gate, I finally had the good sense to ask. And was told it was fifteen minutes down. Fuck! So I started running down the mountain. I channeled my inner Inca and hopped from boulder to boulder. I was actually impressed with myself and with the fact I didn’t break an ankle. I got down that mountain in record time and started my trek up the real mountain at 9:20.

Ok, when they say Machu Picchu mountain is easier and anyone can do it, I want to know who decided this. First, it’s pure stairs. Over 3000 in fact. And the stairs are not even. There are no safety rails. And at times, they are so small and narrow, you barely get half a foot on there. People are going up and coming down at the same time. One little misstep and you are over a cliff. So if Huayna Picchu is harder, I don’t even want to know what the mormons were dealing with. They must have been rock climbing. 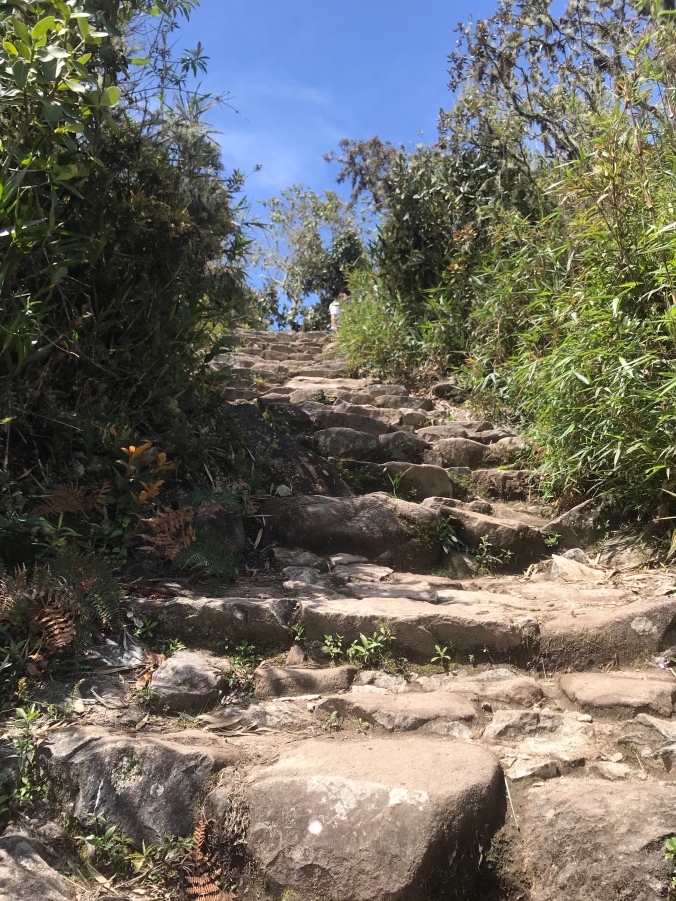 While Machu Picchu is much lower than Cusco, it is still elevated. My heart was pounding with every step. It also didn’t help that these two fifty-five year olds from the states were booking it up the mountain ahead of me. I know it was not supposed to be a competition, but dammit. That was a pisser sweating my tits off and they were barely glistening. While I paused at times on the stairs to catch my breath, I did not actually stop and rest. I think I just wanted to get it over with, plus I had that time crunch in my head.

People coming down kept telling me falta poco, you are missing a little bit. How fucking much?! I wanted to scream. They need markers to give you a realistic approach. One guy finally gave me a picture, go up the very steep stairs for 30 minutes and then you have about 10 minutes more. I almost kissed him and killed him at the same time. What do you mean the really steep steps? What the hell kind of stairs have I been climbing?! But he was right. They got so steep I was using my hands to climb. 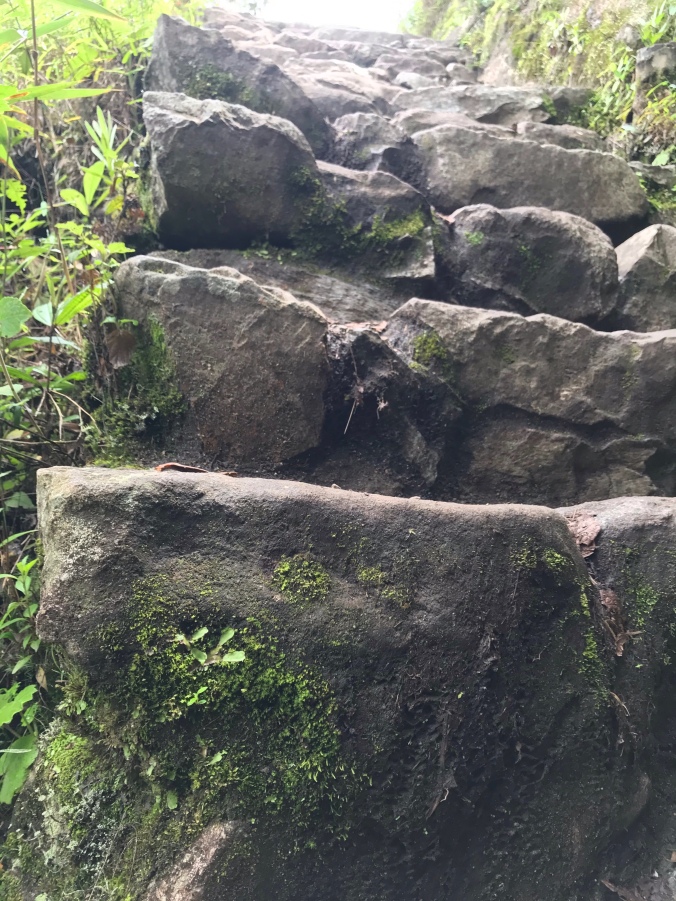 Finally, it got less steep and there were some paths instead of just stairs. But then it was like a practical joke. I would turn a corner, thinking I had made it to the summit only to see more flipping stairs. I must have filmed five times thinking I was on my last stair case. Finally, I gave up filming.

Then, I saw it. It was the summit. There was no other option. And it was filled with flying insects and maybe eight other people. The views were stunning. Was it completely worth the pain? No. But it was another way to say fuck you, cancer. I just climbed 3000 stairs, bitch. I spent ten minutes at the top and said, ok done. 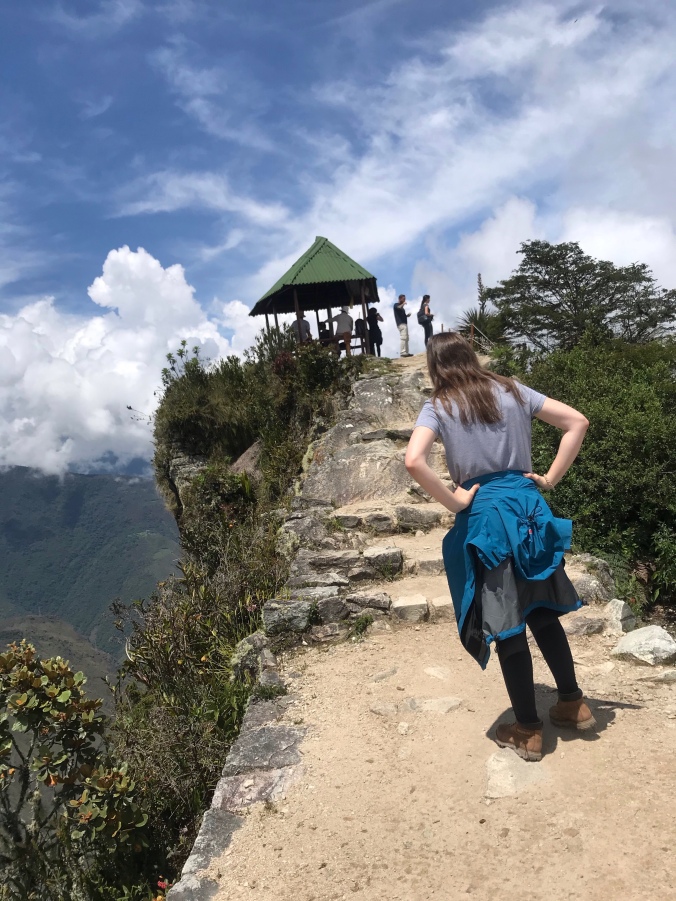 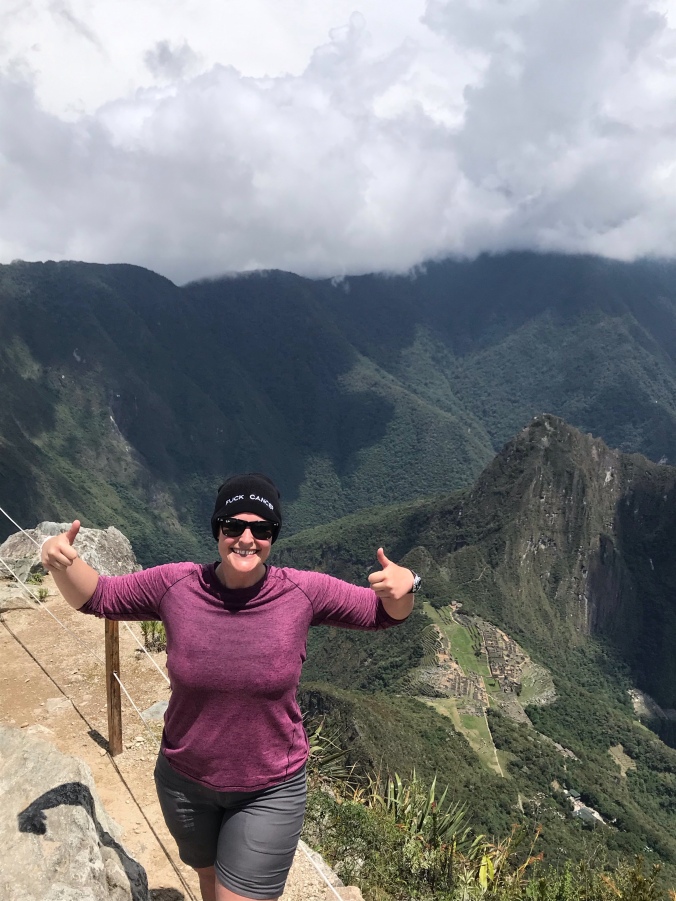 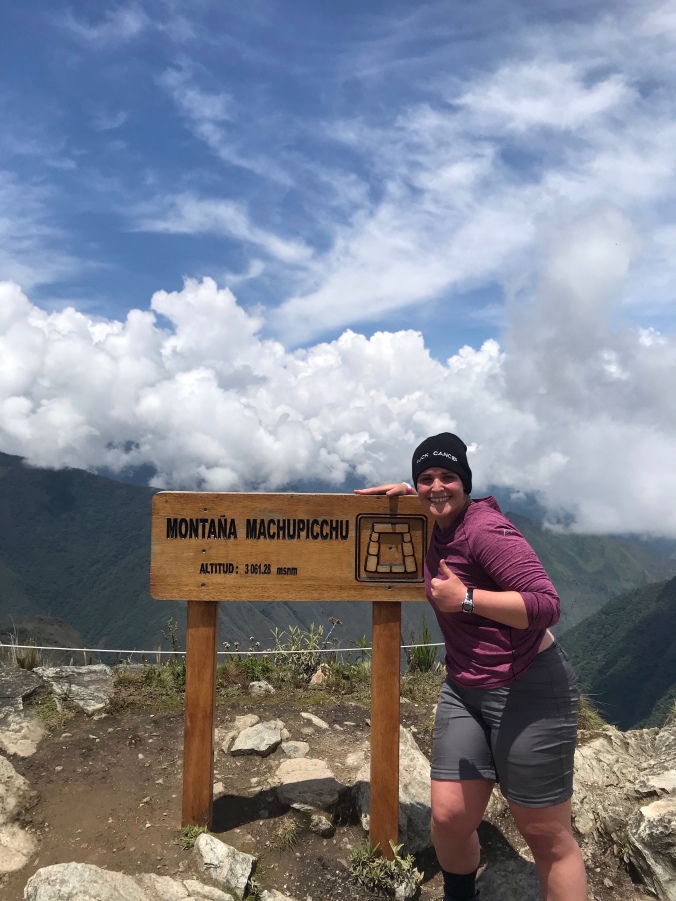 And then I had to climb down. And this is where you start to laugh like a mad person. You are so tired. And you remember certain parts from going up. But you don’t remember how close they are to the bottom. That’s the other practical joke. Going down is harder on the body than going up. But you are not out of breath so you want to go fast. But the crazy stairs are so unpredictable, you end up going sideways at time, which slows you down.

I finally reached the bottom. 11:57am. Less than 3 hours total. I was proud of that one. And then I realized there was still ten more minutes down more stairs to get to the busses. I almost cried. I don’t think my legs and knees have ever hurt so badly. 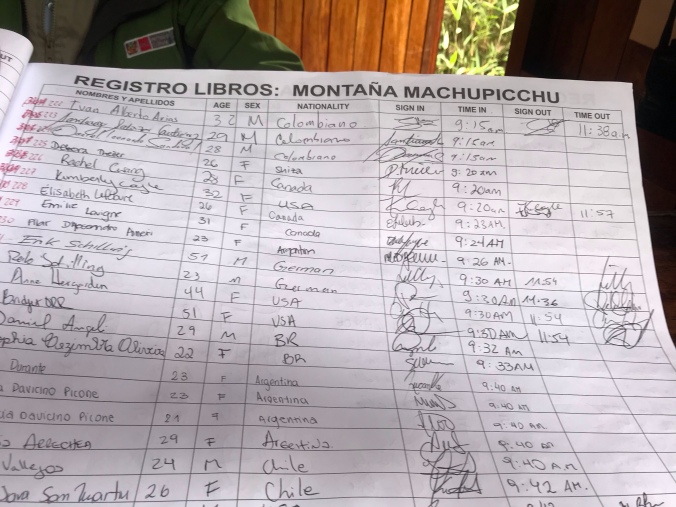 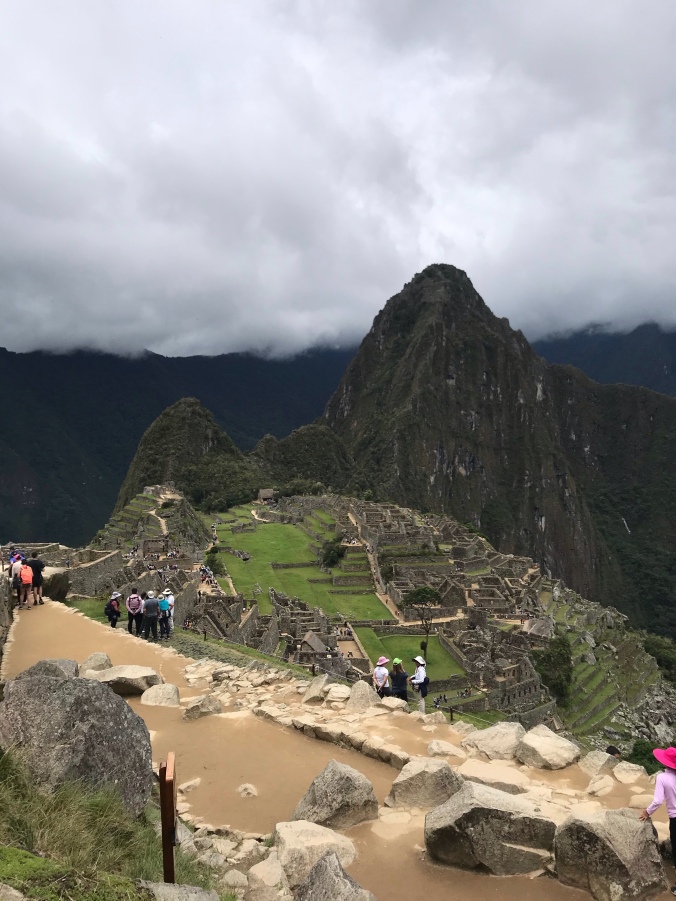 Thankfully, the line for the bus was short. I apologized to the man next to me for my smell and fell fast asleep. When the bus pulled up to Aguas Calientes, I barely made it off the bus. There is this fabulous episode of How I Met Your Mother where Barney is bet by Marshall he can’t run the New York City marathon without training. Barney runs it, no problem. Then he gets on the subway and can’t get off because his legs are so damaged and numb. I felt like this was me. 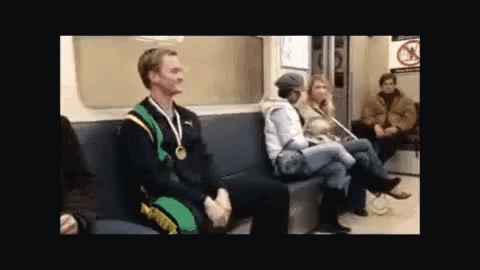 When I made it to the lunch restaurant, I collapsed into a chair and immediately ordered a beer. I don’t remember when this tradition started, but every time I climb a big mountain I get to the bottom and order a beer. It’s my thing and always reminds me of my dad. I give him a little toast before taking my first sip. 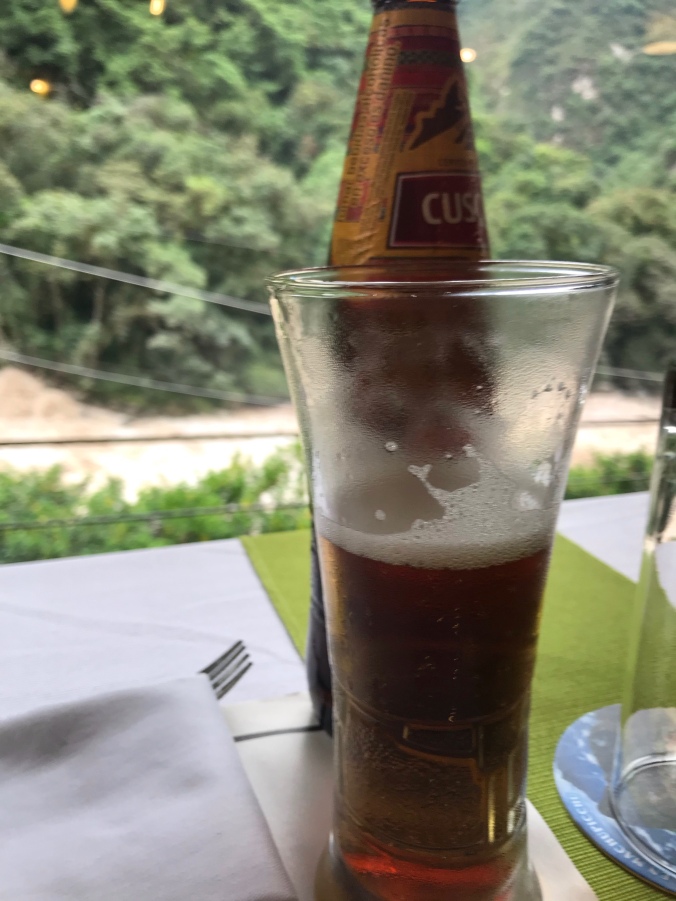 The mormons came in about 30 minutes later. They didn’t look too worse for wear. And we all got great pictures from the day that ended up clearing. Thank you, Pachamama. They did not order their victory beer. Instead, they order Inca Cola, a product of Coke that tastes like bubblegum or Big Red and looks like pee. I guess we all have our vices. I ordered the trout and devoured it. Then it was time to catch the train back to Ollantaytambo. 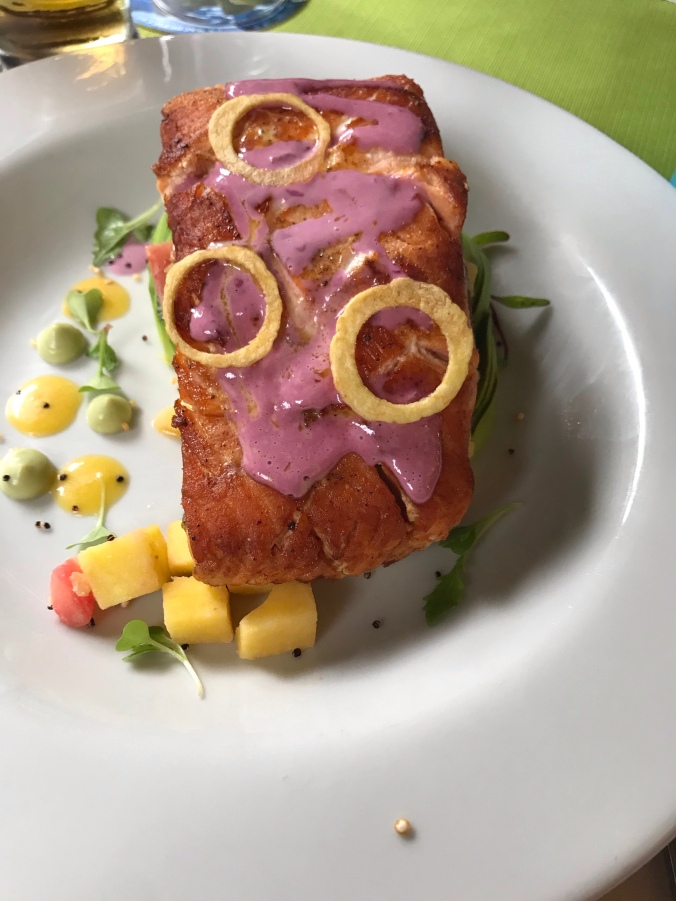 The train ride was amazing. We went right along the path of the river. The man across from me told his whole life story – how he met his Peruvian girlfriend on a cruise, how he worked IT for the Navy as a private citizen and made boatloads of money, how he has traveled everywhere. He even told stories of his ex wife. The new girlfriend doesn’t speak English, so I guess he got away with it. She was giddy every time she saw the glacier, taking endless photos when it came into view. He was an interesting man from panhandle Florida. Oh, yeah. Their next adventure is an Alaskan cruise. He talked and talked, which was fine with me. I had no more energy left for conversation.

We pulled into Ollantaytambo, and caught our bus to Cusco. It was the day after three king’s day so the town was going nuts with celebration. There were bands everywhere. Another couple from Chicago was also on our bus. Once again, I could not be bothered to talk, so I looked out the window at the amazing scenery that passed by. I was just as bad as the Peruvian girlfriend. Every time the glacier popped up, I whipped out my camera. I have fallen completely in love with this scenery. 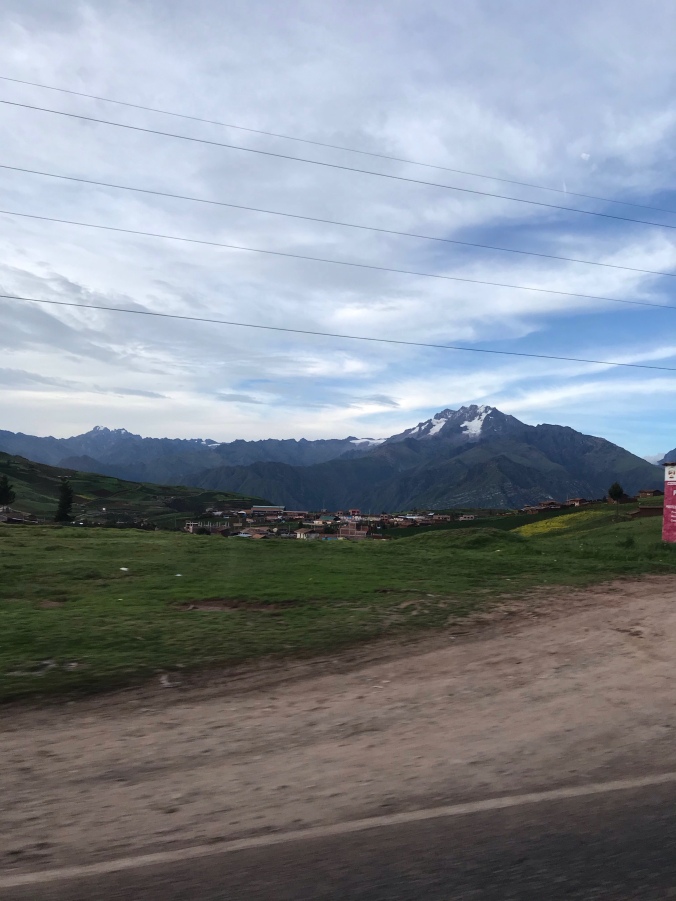 An hour and a half later, we were back in Cusco. I took a long hot shower and then fell right asleep. I have officially checked Machu Picchu off my list.