The next stop on the journey is Puno. I used Peru Hop as my entire transportation. More on them in a later post. For now, let’s just say that my ten hour night journey was filled with restless half sleep. While much more comfortable than a plane, I still have trouble sleeping at an incline, no matter how spacious.

When I arrived to Puno, it was freezing cold. Thankfully, Peru Hop drops you at your hostel and thankfully the hostel (Suite Independecia) was nice enough to store my big bag and give me some breakfast before my journey to the islands.

I had booked the island tour through Findlocaltours.com, a company that Peru Hop recommends going through. It has been pretty good so far. It is economical and the tours are pretty good. The company picked me up from the hostel and we made our way to the peer. With me, from the same hostel, were three young kids from Pepperdine doing a year abroad in Buenas Aires. Oh, and one of the girls is from San Antonio, Texas. With my connections to SA, BA, and Pepperdine, we had a lot to chat about throughout the trip, which was good because we shared the same family for our home stay.

I am not going to lie, the entire time our tour guide, Roger, gave instructions and information, I was dead asleep. I was that tired from the bus ride. The only piece of information I remember is that caca means shit so the correct pronunciation of the lake is said with phlegm behind the ca sound. Like you are making a bird noise. I woke with a jerk as the boat came to a stop and we disembarked onto Islas de Unos, or the floating islands.

There are two main indigenous tribes on Lake Tikicaca – Aymara and Quechua. The people on Unos are Aymara. They build these islands using reeds. In fact, everything on the island is made of reed – the beds, the boats, the food, the toys for the children. The president (a woman!) showed us how the islands were made. She also showed us their second biggest industry, intricate tapestries. The first biggest industry is fish, which they use to trade for clothing other mainland items.

They have a teacher who comes to the island during certain months but only through primary school. Boys and girls are married at 15 and are expected to contribute to the islands. There are about sixty different floating islands and each holds about four to six families. My take way from this island – reeds are amazing plants, can sustain your entire life, and are very squishy to walk on.h

Our next stop was the natural island of Taquile. This place was stunningly pretty and really really fascinating. On this island are Quechua. These people have held onto traditions for hundreds of years. First, the community is run by authorities. These are 56 men and women who are chosen to make decisions for two years. Once this happens, they no longer have authority for the rest of their lives. 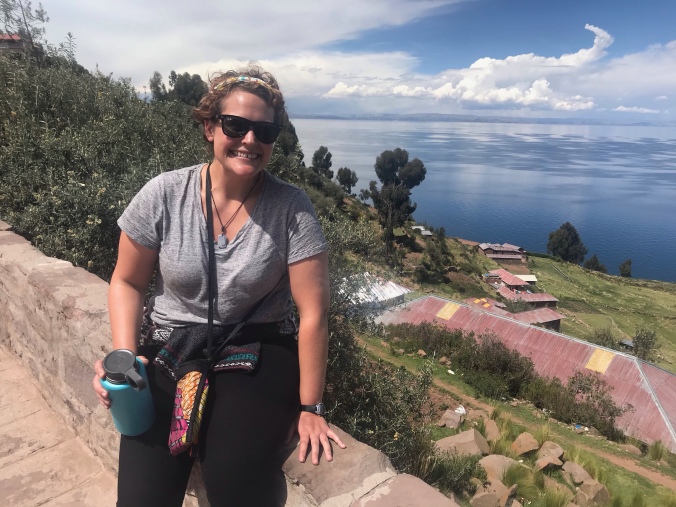 Everything is shared on the island among 2200 people. And everything is the same. The two main industries are knitting and shampoo. Men and women knit and work at knitting houses. The shampoo comes from a special plant on the island. We are told it is so powerful, it keeps their hair black so that there are no grey haired elders. And they live until 95. I know, I had so many questions about the shampoo, too. For example, if I use it will it turn my hair black? The demonstrator used it on sheep’s wool and it turned it sparkling white. So confused but also amazed. 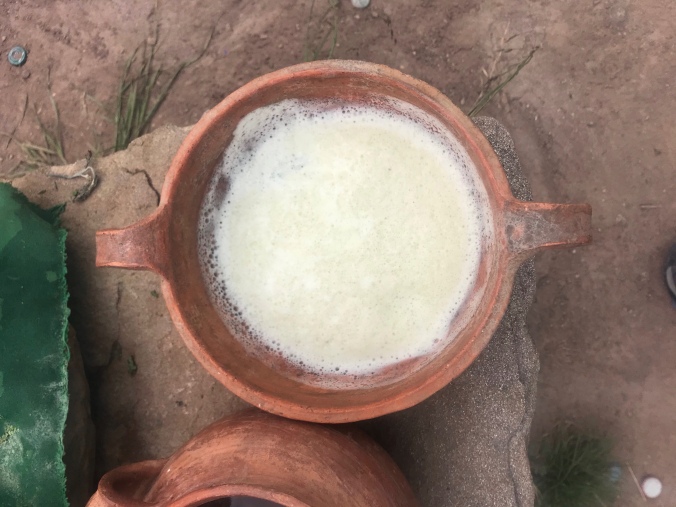 Finally, the hats. Everyone on the island has a special hat and sash that visually indicates their station in life. Children 1-6 have a hat. Single men and women have a hat and sash of white. Married people have a red hat and red sash with a coca bag. (Only married people can chew coca). The coca is also a way of greeting each other. They exchange coca like we exchange a hand shake. Finally, the authority has a super colorful hat. So this puts everyone in a visible place. Now, the married sash is crazy. First, there is no divorce so an engagement lasts two years. In that two years the couple can not touch. The woman cuts her hair and weaves it into the sash of the man. Then the wedding celebration lasts six days. After all of that, the people are married for life. They are very proud of their traditions and very serious about them. I did not see a single person without the hat on. Somehow it all functions and runs smoothly. There is no conflict on the island and has not been for centuries.

We ate quinoa soup and trout for lunch. This is the typical meal and the only one all restaurants serve. The trout had bones, which freaked us all out a bit until we figured out how to eat it. Since they have so many tourists, the authority at the port tells the guides which restaurants they are going to that day. Since it is all the same, it doesn’t matter for us, but makes everything fair for them. After lunch, we headed back to the boat for our final stop. 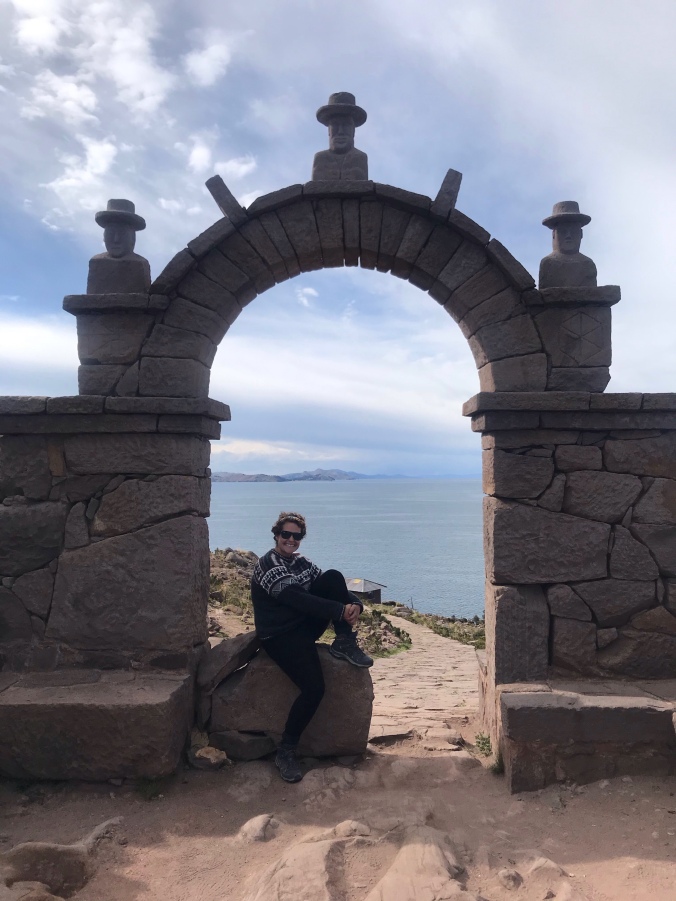 We were supposed to go to another island, Amantani, but there was political unrest among the families. Apparently, the ten families were in a disagreement so that was a bit unsafe for us. We ended up on the Peninsula de Chucuito for our home stay. We met our families and then immediately headed up the mountain to the school to play some futbol with the local children. While I am terrible, of course I played. I got a few kicks in that did absolutely nothing but at least I touched the ball.

Then we were dressed in traditional dancing outfits and given partners to dance. We watched the locals first – skipping and twirling our way through as best we could behind them. I was paired with a guy from Switzerland. In this culture it would have meant we were married to be dancing together. Good thing he was a cutie. 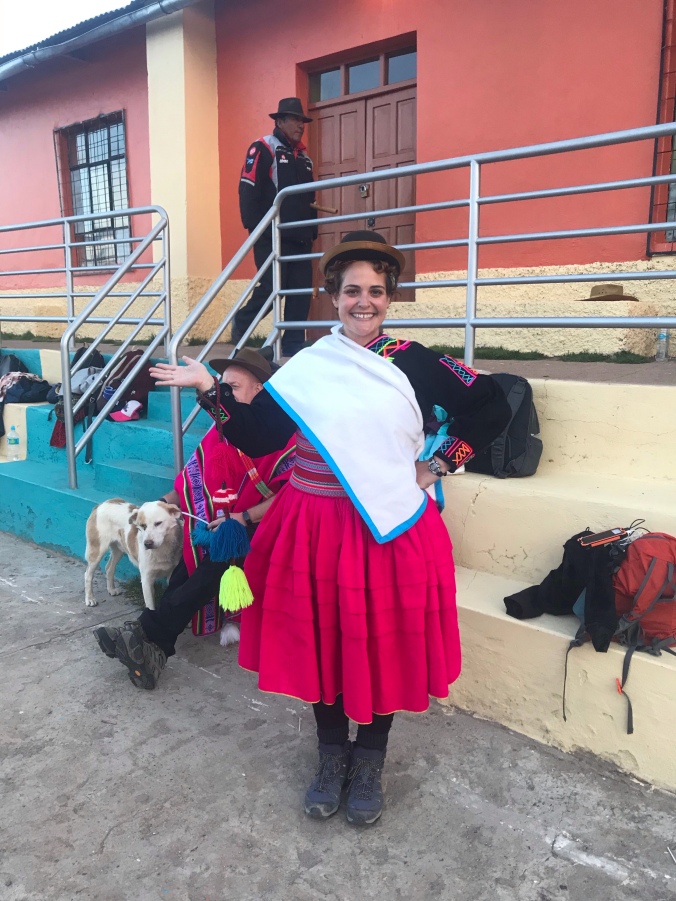 I was wearing at least three layers of clothing and some of the local women had on up to twenty skirts to show off their ability to bare children. It was incredible. Plus, it was cold, so the extra clothes was a bonus. 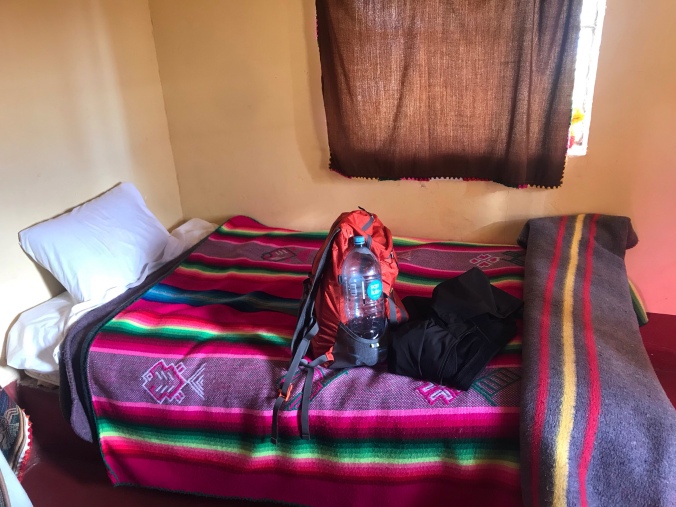 After dancing, we were shown to our rooms. It was actually really nice accommodation minus some spiders and a cold shower. Our beds had nine heavy blankets on them. Getting in that night felt like getting an X-ray at the dentist. While dinner was being cooked, I was coloring with the little girl of the family, Linda, whom I had brought colored pencils and a notebook for (always a teacher) and getting to know my bunkmate, Charlie from London. We ate dinner with the family (carbs and more carbs) and then retired to bed by eight thirty. Even though there is electricity, the family lives sun up to sun down. And I was super tired and cold. The million and one blankets felt so good, even if I had to shut my mind off to the spiders to get to sleep.

One thought on “Day 9: Floating islands and A Homestay”

Tacaruembo and Meeting the FamilySeptember 19th, 2019
If school doesn’t open soon, I found a building that has not been touched by Corona. #uruguaytreasures #roadtrips #openroad. #socaldistancinginthecar
%d bloggers like this: