Come to Rio and you cannot leave without seeing the statue of Christ the Redeemer up close and personal. It is one of the main symbols of Rio and it is truly spiritual – And this coming from a non-spiritual person. Both the path up and the experience at the top is well-worth it all. 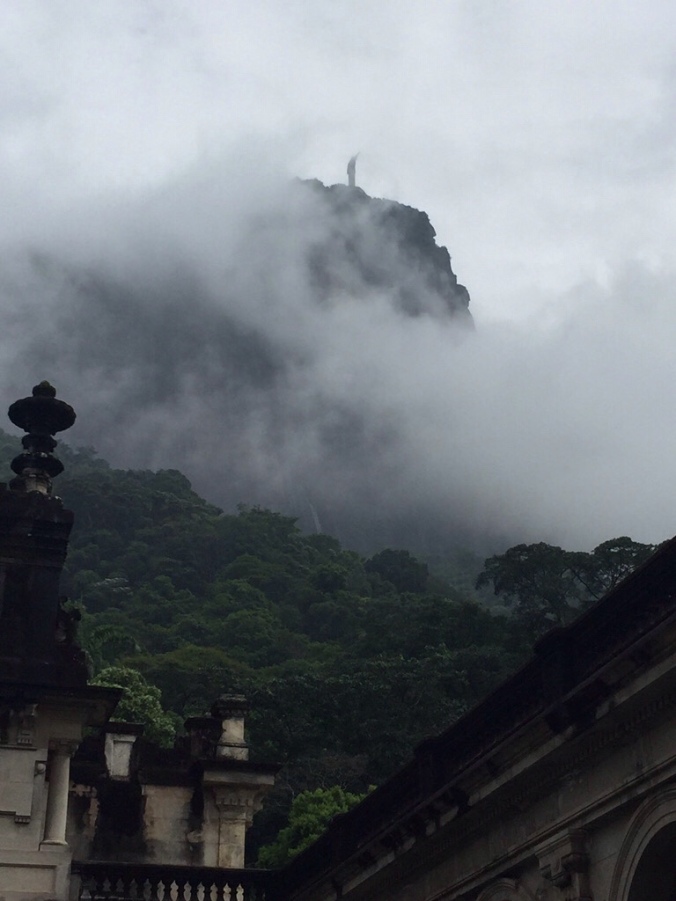 I purposely chose my hostel next to the botanical gardens during this leg off Rio for a purpose: it is literally yards away from the base of the mountain that hold the Christ statue and therefore yards from the trailhead in Parque Lage, which is right by the botanical gardens. Back when I set my mind to this, I was a rather spiritual person. Despite that change in my ideology, the hiking part of the experience was important to me. I read all of the blogs, packed the essentials and set off.

Once I was registered inside the gate, the man said something to me in Portuguese that I didn’t understand and pointed to a sign that had a gun. I assumed he meant no weapons in the park. “Si, okay,” I said and headed onto the trail. There was a group of French hikers as well, so I lagged behind them. Better to hike in numbers after all. Hearing the beautiful French language most of the time was also a bonus. The first leg wasn’t so bad. 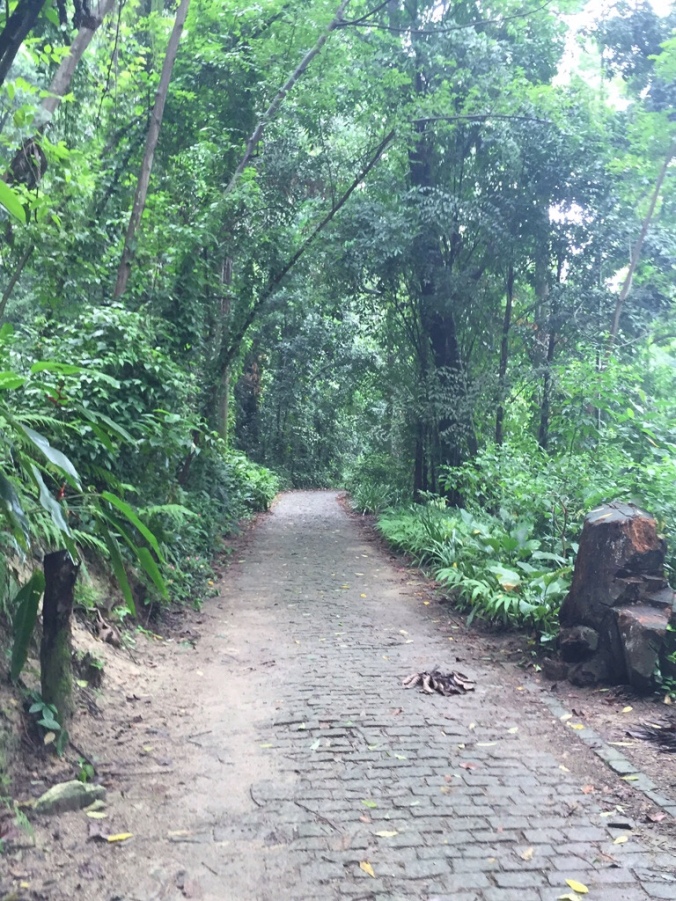 The trail is clear and there is mainly a steady inclined walk. The jungle is incredible around. Rays of light penetrate through the leaves and create little pockets of sunshine on the ground. The air is definitely hot, but there is a coolness provided by the shade of the trees. Roman ruins line the first leg of the hike and you feel like you are in The Jungle Book. 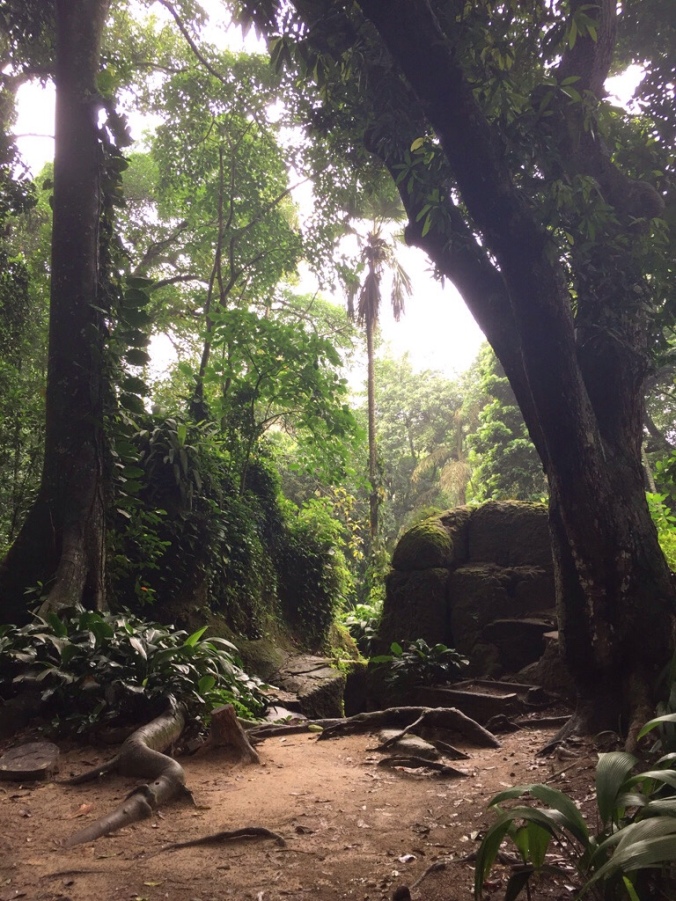 I have expected Baloo to jump out and start singing with me. In all honesty, repeating The Bear Necessities got me through this endeavor. Because not long into the trek, it gets WAYYYYYYYYY steeper. So all of those blogs that called it a fairly easy, non-technical hike were dirty dirty liars. By minute 45 I was really regretting my decision. By the one hour mark, even the French were saving their breath. However, the trail was anything by silent. Birds, insects, and frogs echoed throughout. At one point, I stopped for some water and looked up to see a lemur (or as they call them here Coati). According to my hostel people, they are the squirrels of Rio.

I’m already dying and sweating and wheezing. Then came the first of three rock scrambles. What is this, you ask? A rock scramble are a bunch of boulders that you must scramble over to get back onto flat trail. I was literally on my hands and knees by this point. The French seemed miles ahead of me. The air was getting significantly cooler and the cloud set in upon us. It was completely and totally creepy. I was in a horror film deciding whether or not to get my GoPro stick out so that I could bash the wild animals in the head as they came to eat me. 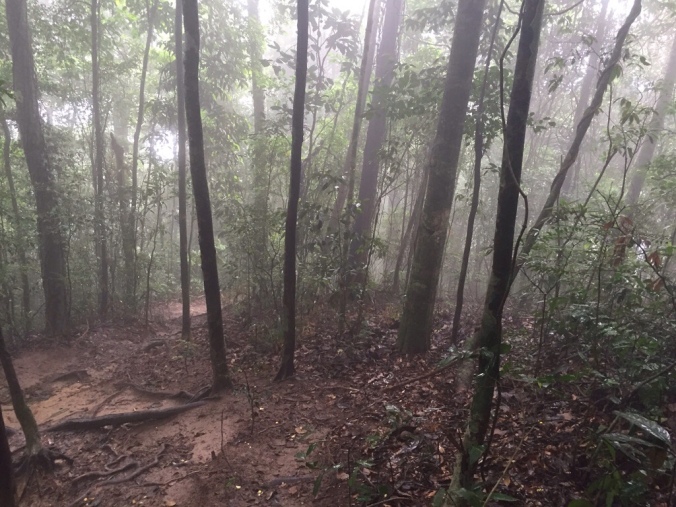 The French had taken a little breather and stopped for a snack about half-way up. The trail is only around 4 km, but I’m telling you…this was flippin tough! We came upon this part where you have to hold a chain to get up the rocks. By this point, I was going to hunt down the blogger who had said it was “a pleasant walk with minor moments of incline” and punch him right in his chiseled abs! The French were learning some interesting English curses and I’m pretty sure I heard a Merde! every once in a while. 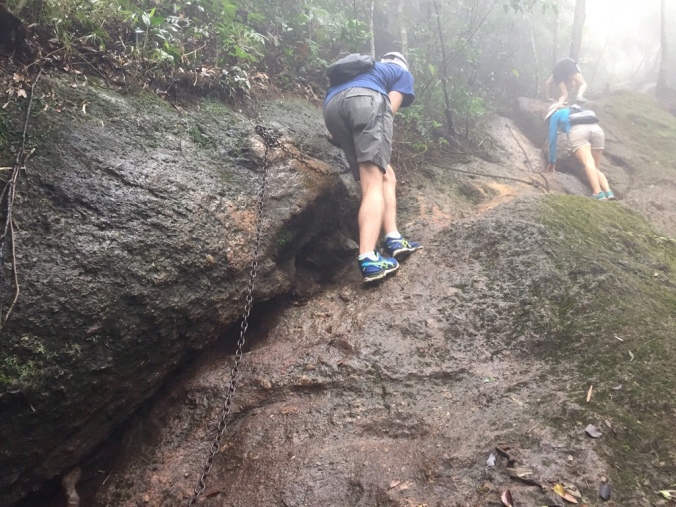 We had one kilometer left. The sign said 40 minutes. Yeah, okay. (Insert 9th grade eye roll). We crossed the Corcovado train track at one point, and I am telling you. My heart started pounding worse than it already was. With the cloud-fog it was straight out of bad horror film. Three French and an American disappeared without a trace while heading to Christ the Redeemer. 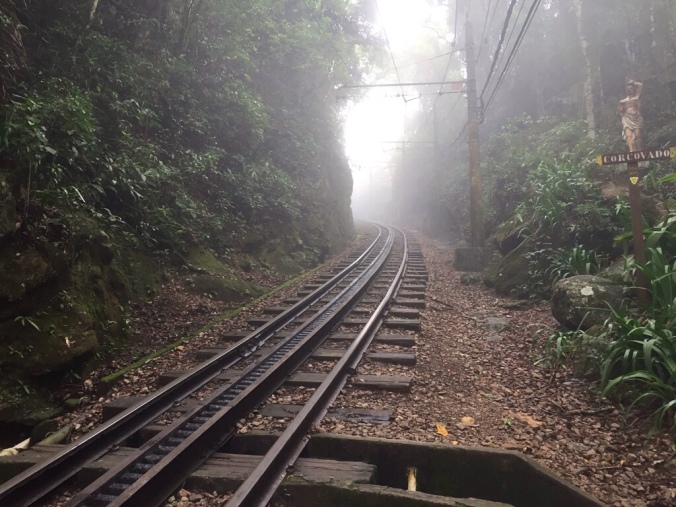 FINALLY, we hit the main road. I literally almost kissed the ground. My legs were shaking and didn’t give a good-God damn about this statue. I wanted to douse myself in cold water and drink a beer! You know that feeling of “just put your head down and keep going?” That was 45 minutes ago for me. My mind was completely blank by this point. That is until the vans come whizzing around the corner. You see, there are three ways to get up the mountain and we chose the dumb one. So great, now I was going to get hit by a car before I even saw the statue. 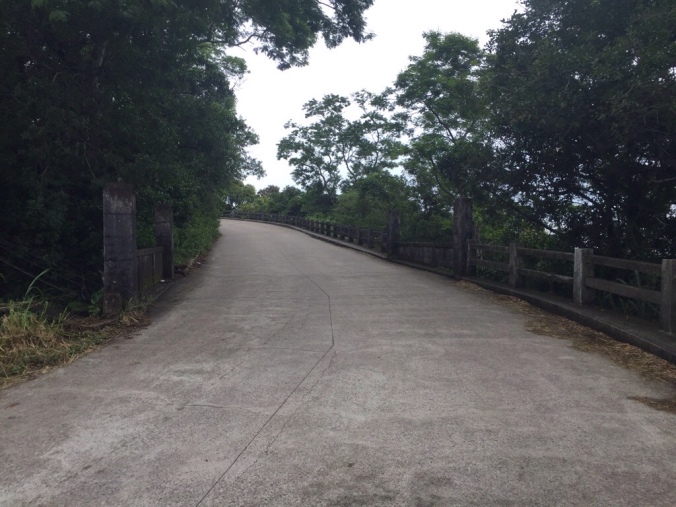 Once I saw the parking lot, I perked up a bit. The statue was so close. Then I saw the copious stairs and almost started to cry. At least six or seven flights of stairs came between me and the statue. So I said fuck it and had a beer first in the cafe. I had already paid my 22 Reals for the entrance fee and this was no Rocky moment. I was dying. Plus the clouds were covering the statue anyway and I thought I could wait until it cleared.

About twenty minutes later I did make it up to the statue. It was extremely creepy looming over this crowd with clouds all around it. 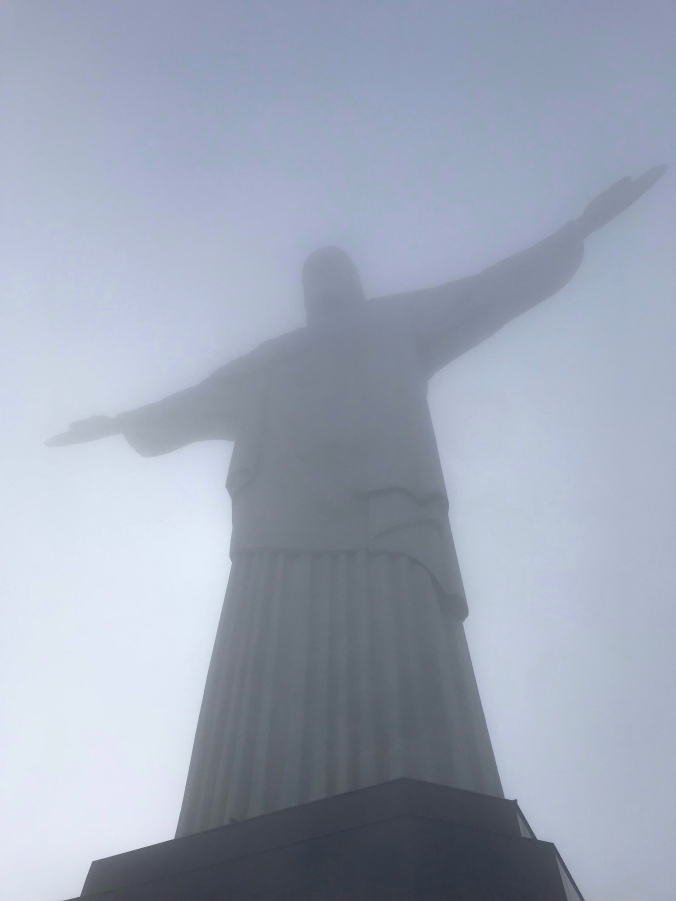 Spiritual, yes and really really unnerving. People all around me held posses, hoping to get the perfect shot when the clouds cleared. Every once in a while the skies would part and a loud collective intake of breathe sounded as people tried to capture the moment. Then the statue was covered again an even bigger sigh commenced. At one point, the clouds cleared for ten seconds and the entire crowd literally went ahhhhhhhh when Christ was covered again. Some people sat on the stairs, some were lying on the ground, some were standing around talking. I was seated in a corner trying to get feeling to return to my legs. 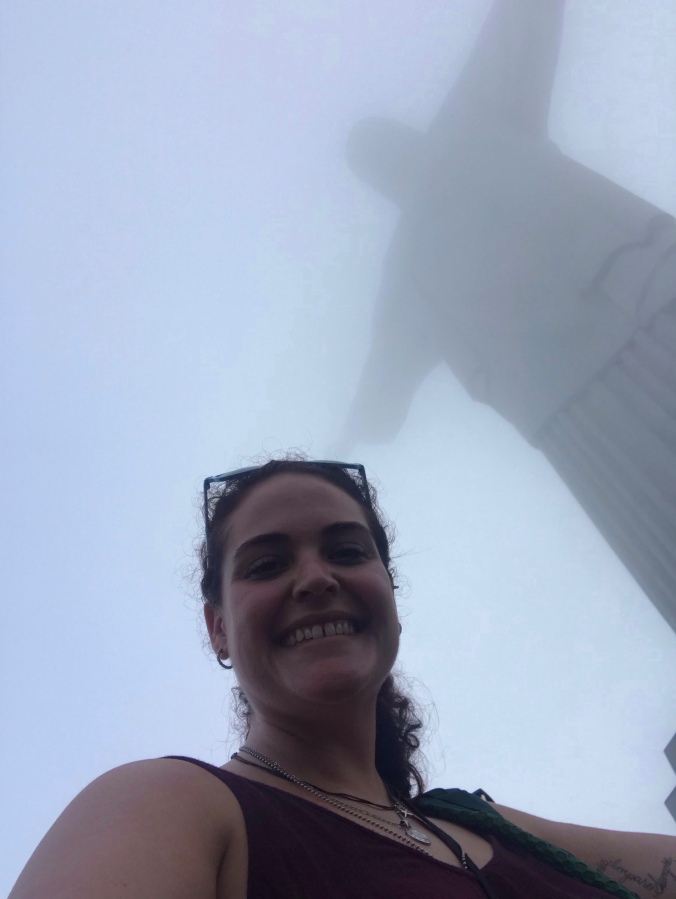 Then I saw it, this patch of blue started in the east. It was large enough to give the crowd a good view for at least thirty to forty-five seconds. I got my GoPro ready to capture this moment, not just of the statue, but also of the atmosphere. Here we were, complete strangers all aiming for one shot, one captured moment to show friends and prove our time in Rio. This was it and we were all ready. The cloud parted, the sun hit Christ and people went mad. All languages rose in harmony as photographers directed their subjects. Their was also a little slice of city below that could be seen as well, so everyone rushed over to the side to get their view shot as well. That was magical. Don’t get me wrong, the statue is an immense presence. You get chill bumps standing below him. But the atmosphere of the crowd was my favorite part. Hundreds of people will remember that moment when the clouds parted for the rest of their lives. They will tell that story over and over again for years to come. The details will change. The disappointment of the cloudy day will be replaced with fondness and nostalgia for that one moment of clarity. 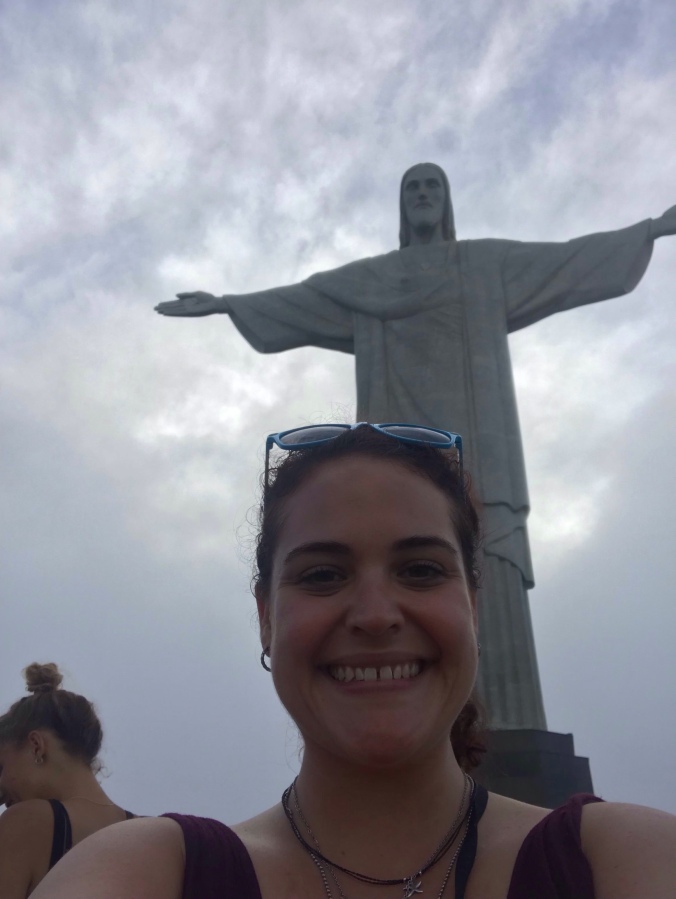 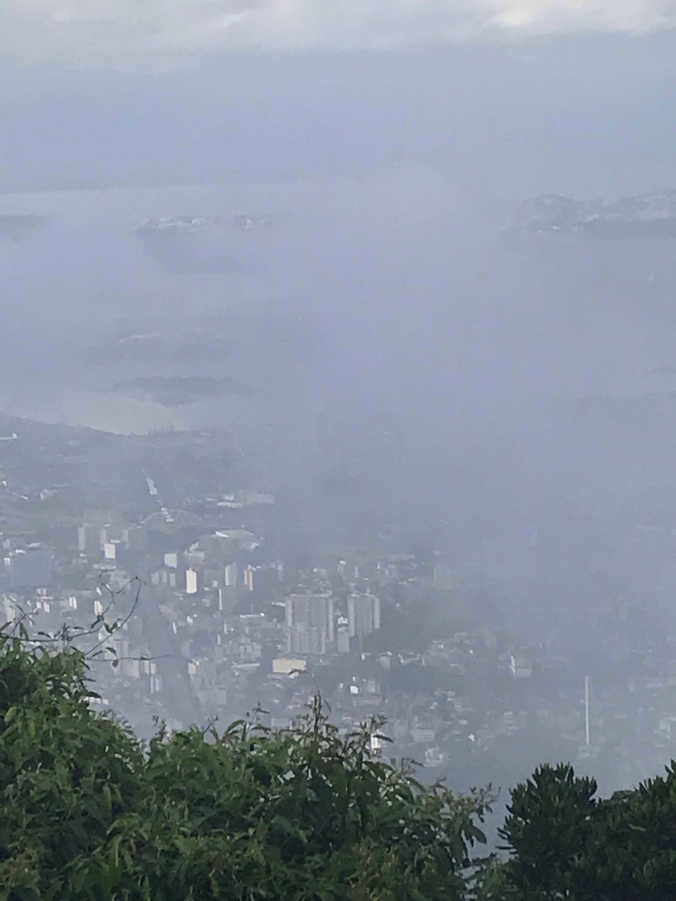 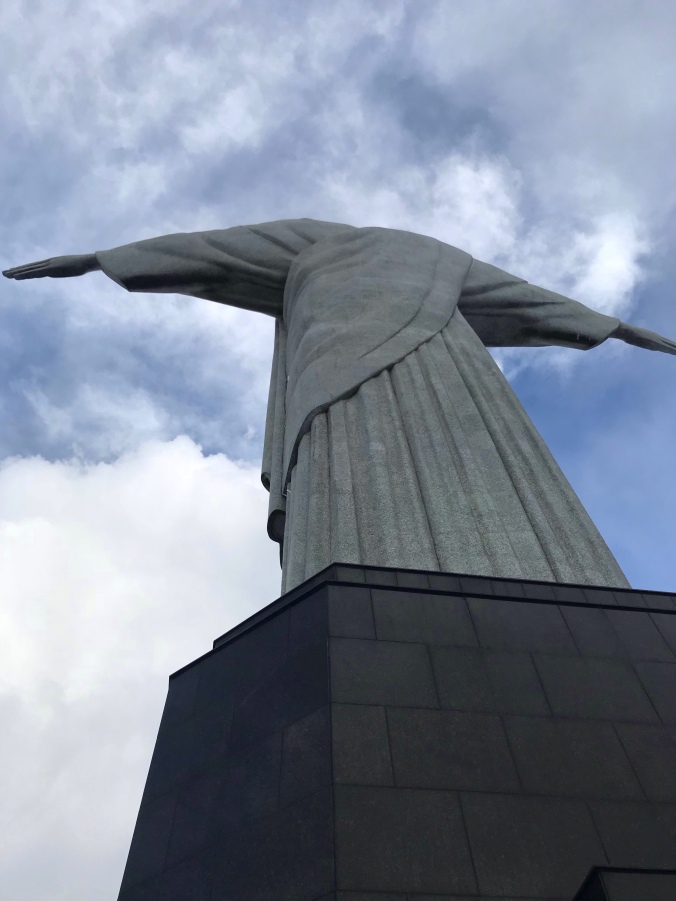 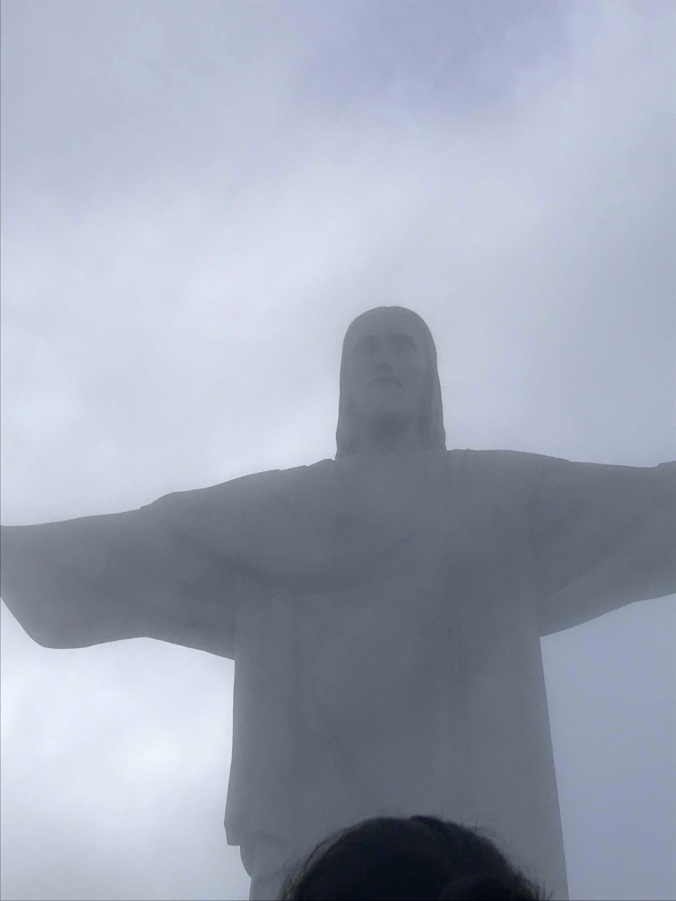 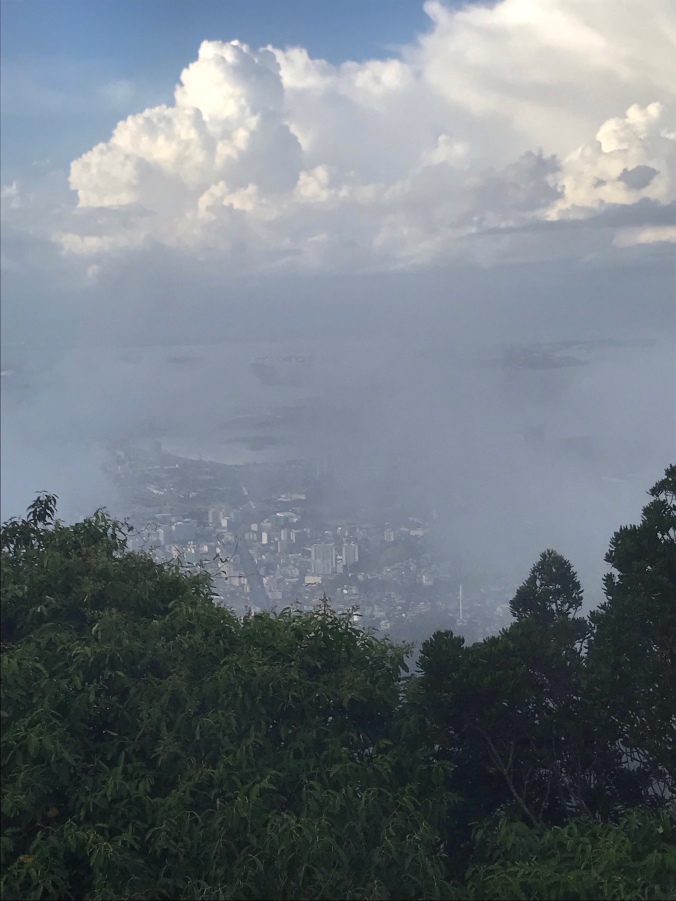 A SIDE NOTE: I was already planning on heading down the mountain in the train (50 Reals BTW) BUT I was talking to some people in line, telling them about the hike of doom. “Did you get mugged?” One of them asked me. “What, no! It was just steep.” Apparently, they had wanted to hike but were told that it was extremely dangerous. Mugging were apparently occurring on the trail almost every day. My mind flashed back to the guard pointing to the sign with the gun. He wasn’t saying no weapons in the park, he was saying watch out for weapons in the park. Are you F-ing kidding me. Sure enough, I got back to the hostel and immediately typed in mugging along trail to Christ the redeemer. Well, that’s something the blogs don’t talk about. One article said 25 people this year alone! My hostel people were like “you should have asked and we would have told you not to go.” Thanks guys. I guess the fog meant fewer hikers and therefore not many opportunities for thievery. Regardless, if you are planning on coming to Rio, just take the Train or the Bus from start to finish. It’s safer and your body will thank you the next day. 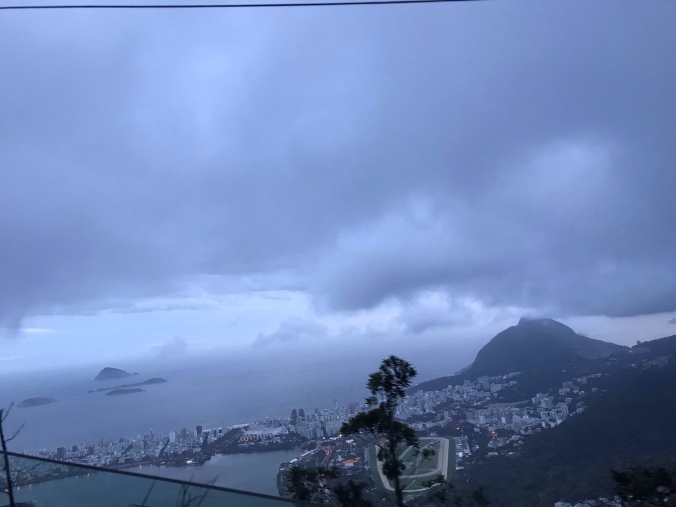