As soon as I posted about my hospital stay on Sunday, I received numerous comments about how everyone was sorry that my weekend was so rough. Although Sunday was a good kick in the pants, the weekend was actually one of my favorites so far in Uruguay. From Thursday to Saturday, I had nothing but great memories.

I have wanted to take my mom to Colonia (a little colonial city directly across from Buenos Aires in the western part of Uruguay) since I first visited almost a year and a half ago. It is one of my favorite places in my new country. I love the cobblestoned streets and colorful colonial buildings. I love the history and the artist shops. It is only three hours from Montevideo – a simple bus or car ride. Well, buses are kind of a no go for me right now (germs…eye roll aimed at you, Kevin) and I don’t have a car yet, (vamos Nicolas!) so my favorite Uruguayan offered to spend the day with us AND offered to drive.

Gabriel and His Street

We headed out around 10:30am and enjoyed sharing stories along the way. When we got to Colonia it was everything that I had remembered.  And Mom was loving it! We started out getting some yummy cold refreshments. Although it had rained like a son-of-a-gun the day before, this day was perfectly sunny. The sky was completely blue, the clouds were fluffy but unobtrusive, and the sun wasn’t too powerful. Mom got some ice cream and Gabriel and I shared a fruit slushy. We were definitely cheating, but it was totally worth it.

We walked around the old city for a while taking picture after picture. We browsed the art shops. Gabriel bought me some crayons for my coloring books. We found the perfect abandoned building to buy and made our plans to open “The Messenger Bistro and Night Club.” Then we ate really well at The Drugstore – a place known for its wild art decor and extensive seafood menu. Again, I cheated a little on the cancer diet.

The river between Buenos Aires and Colonia

Had to take pictures in front of old cars for Nicolas.

After letting our food digest for a bit, we headed along the coast to get our pictures in front of the Colonia sign. These signs are all over Uruguay and make for really fun pictures, especially when you are with really fun people. Then we headed to the old bull fighting ring. It is no longer legal in Uruguay, but the bones of the building are still beautiful to behold. We caught a bit of a snag in our plans because of a collapsed bridge so decided to head back home.

The anchor of the family

On the gorgeous drive through the country, we were singing Madonna and ABBA and having the best time. The sun was going down behind us causing the sky to erupt in color. We had rainbow sherbet on the right and cotton candy clouds on the left. By the time we made it home, I was at my happiest.

I had needed to get out of the city for a bit. I am so used to traveling during my long summer breaks. Even in the states I would travel far and wide during the summer. It is hard for me to remain in one place and even harder seeing all of the pictures from friends as they travel. My little brother was in Malta and I was stuck at home. Some would say, “My God! Your home is in Uruguay!” And I get that, but I also feel like a bird with her wings clipped right now. So, this Colonia trip could not have come at a better time or with better people. Muchas Gracias, my love for coming with us sharing this trip with me. I love you to the moon and back, Gabriel.

My sweet boyfriend (and other favorite Uruguayan) came over Friday for dinner. My mom figured out that he loves her chicken salad and now she makes it for him all of the time. In fact, most of our food conversations lead to “will Nicolas like this?” Considering he is a true Uruguayan who likes four basic foods (Milanesa, Chorizo, Dulce de Leche, and Tortas Fritas) the answer is usually no. BUT he does love her chicken salad.

Dinner in Uruguay starts around 9:30, which is way too late for our United States stomachs, so needless to say I ate before and then had a snack with him. We were eating and looking at cars for me on Mercado Libre (like Craigslist) while Mom practiced Spanish with Duolingo. Every once in a while we would hear, “Dammit” when she got something wrong or her health ran out. Nico and I got into a huge conversation about intelligence and superiority. Mom weighed in a little when I was translating. As it rolled into 11:30, Mom went to bed. We stayed up talking. I love our conversations because we have very different view points but at least listen to each other. Plus we both learn some vocabulary – him English and me Spanish. Both of us were surprised when we looked down at our watches and it was 1:30 in the morning. Time flies when you are with a really interesting guy. Considering I still do have cancer, we tabled the discussion and readied ourselves for bed.

Nicolas and I woke up slowly and late. Mom was already at the Feria. I love weekends and vacations for this exact reason. We had a leisurely breakfast and took our time getting ready. Nicolas wanted to take me and Mom to the fort overlooking Montevideo in Cerro, but Mom was looking forward to working on her book. I think she also wanted to give me and Nicolas some much needed alone time together.

And this is what I like about this guy…I asked what the plan was now and he started looking on a map. He was moving the map up and down around Montevideo and landed on Parque Lecocq – a place neither one of us had been before. We hopped in his car and headed onto the Rambla. Life’s little confessions – I think the way Nicolas drives is the sexiest. hehe. It’s like watching an elegant dance as he shifts gears. He becomes one with the car, which is probably why he loves them so much. (His hobby is buying old beat up cars and restoring them. Right now he is restoring a Chevy Impala 1962.) The sexy driving is a weird observation…I know, but I enjoy being in a car with him. And I love road trips in general so win all around.

We showed up at Parque Lecocq and I went into immediate elated kid mode! Not only was it absolutely stunning, but there were animals! Exotic animals like zebras and baboons. There were also roaming llamas. It was the first time Nico had seen a live zebra. I enjoyed trying to get the llamas to eat out of my hand. 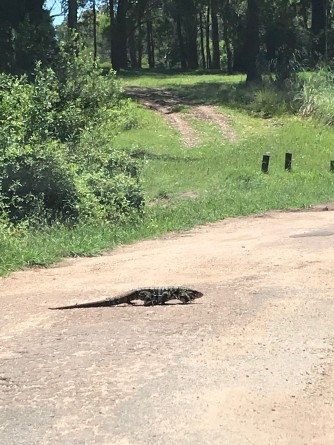 At one point we stopped the car at this overlook. The view was the bridge separating Montevideo from San Jose. There was a little shelter where we sat enjoying the view and each others’ company. It was that perfect moment of peace and contentment. It was the second time that weekend I was at my happiest point. 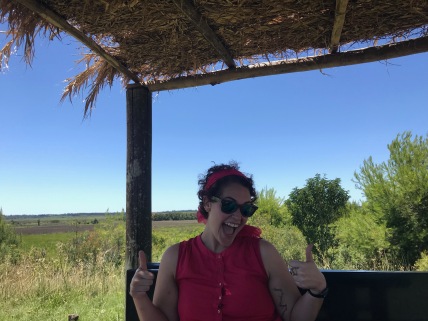 When my picture is taken 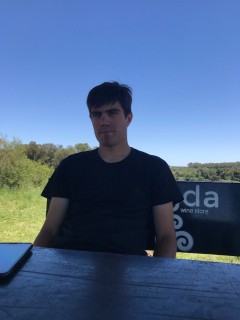 After seeing the only pueblo in Montevideo, we came back to the apartment, had some lunch, and then both crashed. We napped for several hours with the breeze flowing through the open window. It was the perfect round out to a perfect weekend. Because if the weekend started on Thursday then Sunday was technically just the beginning of a new week.