On Friday evening, I received severe second degree burns all down my left leg, on the inner thigh of my right, and on the bottom half of my stomach. 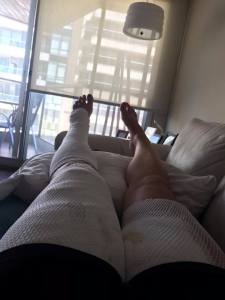 The Story: I made my afternoon Mate knowing that we had plans to go out to dinner and perhaps make it a late evening. I left the water on the burner a little too long, so it started to slightly boil. I poured the water into my thermos. I will usually add some cold water if it is too hot, but this time I figured I had some time to let it cool while I did some more exercises. I had just come from playing tennisand felt like I could still go for some more. So I put the thermos (open) on the TV table. I got out my yoga mat and sat down to start my stretches on the floor. I reached up for the book with my exercises and just happened to hit the thermos with the edge. In a split second the thermos was spilled all over my outstretched legs. I immediately ripped off my pants and jumped into a cold shower. My mantra being “You’re Ok. You’re Ok. Everything is going to be fine.” When I realized that most of my skin was coming off with the downpour of the water, I knew it was time to go to a hospital.

The Hospital: I texted my friends that I needed help. Thankfully, my friend Katie was running right by my house at the time. I covered my legs with cool towels and waited for her. We called SEM but realized fairly quickly they were not in a rush and my pain was escalating quickly. So Katie got me into some pantsand rushed me into an Uber. We made our way to the British Hospital. I thought I was going to throw up in the Uber. Every bump and turn sent waves of pain searing through my body. The emergency receptionist figured out really quickly that I could not wait long to be seen. I think the moaning gave it away. I was rushed into a little room, stripped down, and immediate placed in another room where the nurses quickly started applying cool water and ice-soaked rags on my legs. Poor Katie got a whole new view of me. I was in so much pain, I honestly didn’t care who was seeing what, I just wanted the pain to stop. I will say they were super attentive at the British hospital. They made sure we had English speakers to explain what was happening. And every time I rang the bell because I was in pain, a nurse was there to change my dressings and make me cooler. Three doses of Morphine later and at least 30 different changes of the rags I was down to slight wincing. Katie was absolutely amazing. Not only was she a super Spanish translator, but she went to two pharmacies to get me pain meds. The doctor put on second skin patches and some gauze and sent me on my way.

The Changing of the Dressings: I slept that night (Thank you morphine) and woke up the next morning to go to my 10:50am appointment to change my bandages. My friend Brad was kind enough to pick me up and take me to the hospital. I was doing okay on the ride there. However, when they took me into the back room and started pulling off the second skin, all of my tough Kim attitude went straight out of the window. These burns are not only in sensitive places, like my inner thighs, but the second skin is sticky which means when they pulled, the burned skin pulled off too. Then they had to scrub the wounds to make sure they were clean before redressing. We had to stop three times because I thought I was going to be sick. I broke my promise of not crying. By the time they made it to my foot, which was the worst burn, I was in full angry tears – angry at myself for shedding them and angry at the situation. My wounds were redressed and re-gauzed. As I hobbled out to the waiting room I was shaky and teary and disoriented. Brad was so good. He just let me breathe through it and kept talking to me. By the time I made it home, I just couldn’t do it. The pain was greater than anything I had ever experienced. I started sobbing and called my mom. She sang to me, she told me to methodically rub a pillow to make my brain focus on my fingers, she told me stories – she calmed me down and therefore helped calm the pain. All day, the pain came in waves. My friends Tavis and Diego came to visit and brought yummy goodies. But my appetite is still all kinds of messed up. Tavis sat with me for a while and watched TV. Just his company was appreciated. But when he could tell the pills were kicking in, he took his leave. I went in and out of sleep and finally made it into my room where I slept most of the night.

Day Two: I woke up so stiff, which is a good thing because it means the skin is starting to scab over and tighten. Ever move  twinges, but the pain at least doesn’t fully take my breathe away.  But I am quite literally leaking the most nasty stuff out of my wounds. I have to sit on a towel just so I don’t leak everywhere. More friends came to visit – Brad, Nancy and Greg, Katie and Ana, Hector and Marisa. They brought food and laughter and company. My heart just warms with the amount of love and support I have been given. The pain is still significant but not constant. The biggest issue for me is feeling disgusting. I have never felt this dirty before and I have been to Bonnaroo three times! I can’t fully shower and the leaking is just fully gross! I am constantly burning incense because I fear that I will start to smell. Just another adventure of a burn.

Day Three: Woke up so stiff I could hardly stand it. That first moment my left foot hits the ground feels like a cartoon bomb is exploding around my head. Once I get going, it subsides. Still don’t want to eat. Even Nancy’s cheesecake (which is the best thing ever) can only be consumed in bites. I am BEYOND gross. And now my mind is no longer fuzzy and lethargic so the stir-crazy is setting in. Plus the massive amount of teacher’s guilt for not being at school doesn’t help. I hate being vulnerable and dependent. It goes against my entire nature. So I am going to take this time to write. I am going to take this time to read. And I’m going to take this time to learn some Spanish. My doctor’s appointment to change my dressingsare tomorrow and I really am not looking forward to it knowing what happened last time. But I’m hoping that after the pain, they will tell me that I am healing and will be able to go back to school and at least get back to a semi-normal routine.

2 thoughts on “The Burn”