When you are all alone and thousands of miles away from your actual family, you latch onto a new family as quickly as possible. The international teachers become a family out of both necessity and commonality. Unlike blood relatives, we choose to be around each other and actually get along. Through this familial bond, it is not unusual for us to do things very family-esque.

Family game nights have become some of my favorite events with my peers. It started with one of the episodes of Game of Thrones. I showed up to Ariana and Pedro’s house  a little early and saw the boys playing an intense and involved game of Game Of Thrones Risk. My heart smiled. My family is all about family game night, and even though we mock my competitiveness and my brother’s notorious losing, we never miss an opportunity to get out the board games or cards. So seeing people I have grown to call family play board games was great!

Then I had a few people over to my apartment for a low-key evening…or so we thought. The lasagna was finished, the wine was poured, and Brad unveiled his magical “Fun Box.” 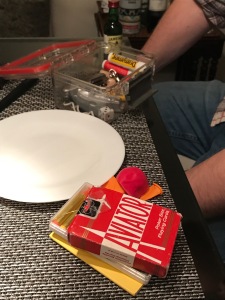 Let me explain. It is a pint-size see through travel box that has items that make everything fun – cards, balloons, face paints, mini journal, dice, pocket knife, cork screw, medication, a lighter, etc. As soon as the lid was lifted, the whole table got really excited! So of course we had to play cards. That is what families do! Katie suggested Gin Rummy, a game I have loved since I was a small child and played with my grandparents. Our Chilean friend, Seba, and Canadian friend, Alex, didn’t know how to play, but after a practice round or two they got the drift. However, Katie being the brilliant chica that she is suggested upping the stakes. She suggested that every winner of a round gets to paint something on the face of every loser of the round. GENIUS! By the end we all had some unusual new face additions and loads of laughter. It has been one of my favorite nights thus far!

Last Thursday, we had poker night over at Brad’s house. As soon as I got the invitation, I became giddy. It brought me back to epic poker nights on the beach with all of the cousins – lucky hats adorning heads and grandparents looking over shoulders giving hints on which cards to discard. Those are some of my all-time favorite memories. So of course I showed up in my lucky Scottish hat I inherited from Mimi. I was ready! 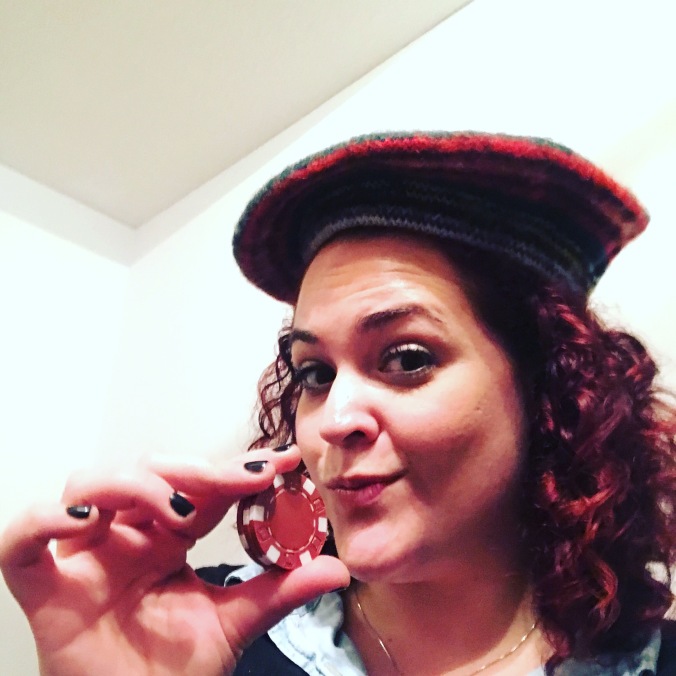 Pedro was the serious player, relaxed and ready to take the pot. Alex the anxious player, always tense beside me like he was ready to pounce on the chips when he won. Erin and her husband were the sneaky players, acting lost and then dominating hands. I lost off Erin on a few good hands. Brad was the knowledgeable player, calculating every move. Katie was learning. I loved watching her win. It brought me back to some of my first wins where I too let out some gleeful whoops.  And I was the (surprise surprise) competitive player.  I lost several hands in a row; my piles of chips dwindled away. I was about to pout and give up on the whole endeavor and join the non-player conversations when I won a really good hand. Then another. And another.

Finally, it was down to just me and Alex. By this point in a real match I would have cashed out. I really hate to lose and I knew that I was up from the 200 pesos I had put in the pot. But then Brad zinged me (For all of my You’ve Got Mail loving friends and family). He looked me straight in the eye and said, “I’ve seen that look before when you were trying to drive the hill. I think you’ve got this more than you think.” Well, fuck! That was it! Competitive Kim reared her ugly head and I was in it to win it. Hand after hand we played, bet, and folded. Pedro, our permanent dealer, couldn’t shuffle fast enough. I would get these amazing hands and Alex would fold. I’m sure vice versa. It was down to one hand. I had two pair (kings and eights) and was ready to take the pot. All in. Apparently Alex was done with dilly-dallying as well. All in. I lost to a 3 of a kind Ace hand.

Needless to say, lady luck was not with me that night. I did win second, which meant I got my original money back. I guess the hat kind of worked after all. My competitive pride was only mildly wounded, but getting a chance at another family game night was well worth it. I hope this becomes a tradition with these amazing people. And now that I know your secrets, Alex…it’s on!!