A night of Nostalgia.

At first it sounds somber – A longing for the past. A yearning for what has been. But in Uruguay, the night before the recognized Independence Day is one of celebration for nostalgia. It is a celebration of the past decades of music and what once was that brought us to this point. I was so excited for this day. First, the teachers at the school organized a secondary-wide teacher dress up to surprise the kids. Now those who have taught with me, or just know me in general, know that I LOVE a good dress-up day, especially one that celebrates the seventies and eighties.  I had my outfit picked out weeks before.

Me and my co-teacher Julia represented the decades of women!

Seeing all of my peers in their outfits warmed my heart. We had a Danny Zuko, a seventies disco man AND woman, a hippie, and a fifties housewife! It was amazing! We also took the kids out of first period to have a impromptu assembly where we projected “I Will Survive” Just Dance (video link included just in case YOU TOO wanted to learn the dance moves) and let the kids go crazy for a bit. It was amazing! We should do that everyday!

So not only was school wicked exciting, but I was all kinds of ready to get down to some seventies, eighties, and nineties music. The Uruguayans LOVE our oldies, so I was just waiting for some Beatles, and Guns and Roses, and Britany Spears! Night life does not start here until at the minimum 9:30pm, and even that is pushing too early. You can only imagine how late Noche De Nostalgia was going to kick off. One of the parties I was looking into, didn’t even start until midnight. Needless to say, I had some downtime.

So I put together a little memorial recording for my grandparents and had a little meltdown. (More on that in a future post.) I watched some movies and took a nap. Then I met up with my ladies at a neighborhood bar called Bar Esquina. The drinks were pretty good, but my food never came. We kept asking the waiter and kept asking, and he just kind of blew us off.  So we ended up leaving before and getting this amazing street food called arepas. 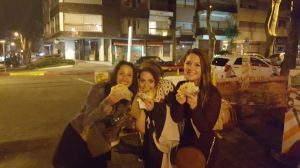 Eating our Arepas and loving it!

They are corn puffy tortillas wrapped around meat like pulled pork and chicken…AMAZING! They were so nice and stayed open just for us because my friend told them that I was starving and never got my food at the last place.

Then we walked to a place called B Haley. This place is really amazing! It’s a young crowd, very open, and karaoke! Of course the Americans started out the karaoke night with some Dancing Queen. Plus it was our friend Laura’s birthday celebration, so we ended up changing Dancing Queen to Birthday Queen as a nice little shout-out!

The Dancing Queens starting it off!

Then we continued to go back and forth between English songs and Spanish songs. We were dancing all around and had microphones handed to us constantly. You know how much I love a microphone!

We hopped in some Ubers and headed to the night club, Despues de explicar. Because what is a noche de nostalgia without a night club playing some oldies! I love a good dance club, but they can get a little claustrophobic for me. I think it’s because I am so short, when I feel like people are crowding my space, I get a little shortness of breath. I definitely had to do some deep breathing exercises in the club a few times. This place was packed! I also had a pretty significant American epiphany – other countries have their own version of oldies. I have traveled extensively and even I still have this complex that American entertainment is universal. All of my Uruguayan and Chilean friends were singing at the top of their lungs to songs from their childhood. It was really cool to see their nostalgia. They reacted to a nostalgic Spanish song in the same way we react when Don’t Stop Believing comes on.

Once again, we didn’t leave the club until 5:30 in the morning. And what is a really good party night without a typical ending. We got in the uber and found out someone before us had vomited all over the backseat door. So as Katie and I squished together to get as far away from it as possible, I realized that was the perfect ending to one of the biggest party nights in Uruguay. You got to love a little nostalgia!