For years one of my indulgences has been getting my nails done. It’s such a teacher cliché, but I bought right into it. At the beginning of my career, I was consistent – every two weeks, a standing appointment. But once I started realizing that my teacher’s salary was just not going to budget in frequent nail indulgences, I tapered off to once a month. I also love getting pedicures more than manicures, so by the end of my time at HHS, my fingernails were pretty repugnant.

There are two reasons I love having my nails done: the first is the visual effect. I gesture a lot with my hands and rarely wear shoes, so I like to see the pretty colors flash out of the corner of my eye. The second reason I want my fingers done is because I have a terrible nervous habit of picking my cuticle.Anytime I am in a situation where I am uncomfortable, I pick at my cuticle.  I once had to stop a therapy session because my finger was bleeding all over the rug. My hands are really dry anyway, so picking at the cuticle doesn’t help the look. I used to bite my nails, but stopped after getting acrylics for a few years. Now it’s the gel that I love (even though the UV dryer will probably give me major hand cancer.) It never fails, no matter which salon I go to in the states, the little Vietnamese man or woman looks at me and clicks his or her tongue while scolding me for my terrible cuticle maintenance.

Moving to Uruguay, I knew that I was going to be placed into LOTS of uncomfortable situations. So I got my nails done right before I came, hoping they would at least last until the kids got here and met me. That fantasy was short-lived as I walked into dry winter Uruguay. My nails didn’t have a chance! So I panicked for a second as one-by-one the gel started peeling. Then I decided to ask our HR person, Julie, where she gets her nails done. Julie is always so put together. Everything about her is beautifully immaculate.  I figured she would know a place. And sure enough, she told me about a place right by school! So last Tuesday, I walked the short couple of blocks from the school to the nail salon. The salon is in a little strip-mall complex. It’s on the top floor. Walking up the steps, I started to pick. Sheer terror was running through me – if I f-ed this up, I would never be able to color or cut my hair again! (The true fear of moving abroad = finding a new hairdresser to cut curly hair who also understood my need to be a redhead.) In my head, I ran through  all of the Spanish words I know that are associated with nails and colors, took a deep breath, and entered the store. Yo quiero colores por mi mano. [I want colors for my hand.] What?! After giving me the dog head-tilt, the woman started speaking rapid Spanish. SHIT SHIT SHIT…my eyes turned into saucers. My mind was screaming “RUN AWAY,” but I was determined to get this right. For my hair’s sake. After broken English and broken Spanish and some mad google-translate skills, I was seated at a table. All went well until the color part. First, I totally forgot the ‘g’ sound, when put with ‘e’ is pronounced like an ‘h.’ It took a solid minute to figure out “hell” and “gel” meant the same thing spoken aloud. Second, I had no freaking clue how to say dark in Spanish, so I ended up saying Negro pero no negro. Si? [black but not black, yes?] After picking up every black color, we finally found a dark purple (which I now know is violeta).

So take always from a Uruguay nail experience: 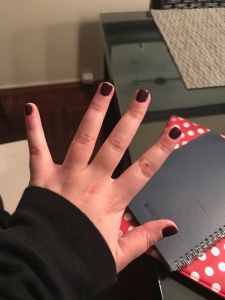