You know you are a spoiled traveler when you finally get on an airplane to move to your new country and you are a little taken aback by the fact that the seats don’t have individual entertainment screens. Instead you are forced to watch Boss Baby over the shoulder of the person in front of you on the shared 15 inch screen on the wall. Turn your headphones to channel 11 and pray you don’t have to pee so that you don’t miss a moment of the god-awful kids movie you would never chose to see if you had the choice! 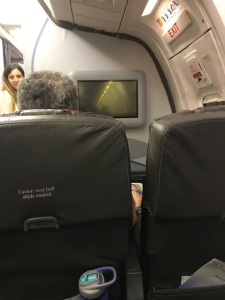 Ironically, my flight from Dallas to Miami was an updated international plane with individual screens. So my 2.5 hour flight went by super fast, while my 9 hour flight was two Tylenol PMs away from going insane. Thankfully, I did sleep for 6 hours of the flight. Sleeping on a cot in displacement land will apparently cure me of my non-sleeping on an airplane-itis. I also was smart and downloaded the entire fifth season of Mad Men onto my iPad, which made the last two hours bearable. Kim for the win!

On another first world note…my Amazon Fire Stick works at my Uruguayan hotel and I have never been more gleeful about a working technology in my life! Kimmy Schmidt is the perfect mindlessness that I need right now to unwind and crash after a very long day.

MORNING UPDATE: I did make it to Uruguay at 8:35am this morning. ALL of my luggage made it. I did accidentally leave my backpack in customs as I was trying to maneuver 3 boxes on a cart and two suitcases through. But no worries, Uruguayan customs is WAAAAYYY more lax than the USA, and they let me go back through to retrieve it. Whoo! And my wonderful school director picked me up and personally drove me to school for house hunting orientation. Despite sleep deprivation and clothes that were three days old, it was a pretty smooth transition into my new country.